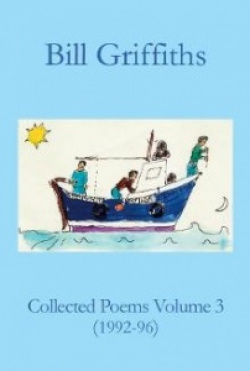 First of all, let’s deal with the figures. This book contains nearly 500 pages of poetry and covers a five-year period. Two other volumes, each equally lengthy, have covered the period from 1966-1991. Griffiths died in 2007 aged 59 so a further 11 or so years of poetry remain uncollected. When it came to writing poetry (plus short stories, other prose, translations of Old English poetry and books about north-east dialect) he was certainly no slouch.

But of course that doesn’t mean he was any good. I can happily report, however, that there is a lot of great quality here – something to savour on almost every page. What it isn’t full of, however, is tightly-rhymed, neatly metred poems that could grace any of those anthologies of favourite English verses the mainstream are so fond of. There is a lot of wildness here, along with a lack of concern for the niceties of English speech and grammar, and politics, and anger, and of all kinds of demotic speech. In fact, the poet cris cheek, on receiving his copy, said on Facebook: “This is what an anarchist poetics looks like.”

Bill Griffiths was first published by Eric Mottram in the Poetry Review, when the magazine was taken over by a collective of avant garde and experimental poets that caused so much of a ruckus they were eventually ousted by an Arts Council that thought the barbarians had taken over. He was long associated with radical poets as Bob Cobbing, and he did experiment with sound and visual poetry though this book really includes none of that. He had been a Hell’s Angel, and lived on a boat in London until moving up to Seaham in County Durham, after a disastrous fire at the boat. The poems in this volume are all from the first few years of that northern life.

In it, he actually embraces the dialect of the area; sometimes, as in the poems of ‘The Cuddy Anthem’, this involves actual dialect poetry:

Often though, it comes through in a word or a line, or just his use of contractions and colloquialisms like ‘ov’ for ‘of’ or ‘ovva’ for ‘over’. He himself was from Middlesex, but his love of language meant he was able to learn the speech of the place he was in and absorb it into his own practice.

The subjects here are also wide-ranging, but I want to bring your attention to one of the recurring themes of his poetry: that of prison life and the life of the so-called “criminal classes”. An important poem in this would be ‘Star Fish Jail’, an accountant of prison officer/prisoner brutality that he  heard from a prisoner, who was mixed race and frequently brutalised by the prison guards. Here’s just a short extract:

It was the same inside : exactly, this time too.

I was picked off right at the start : it was the red-haired screw again,

sez that’s the nutter there : I know him;

get him over to the hospital wing, : where he belongs.

And I was took off in front of all the inmates :

making out I was some rapist or what.

Oh shit! what a fuckin’ place for a human : just a group of us,

The visceral language is necessary here; this is not a pretty experience that’s being written of. But inside these lines is the use of a very Anglo-Saxon device of the caesura and of alliteration, and an attempt in some ways to write a version of ‘The Wanderer’ for the modern world. It’s supposed to make you feel uncomfortable, and even possibly to anger you. If there’s any contemporary comparison, I can only think of Tony Harrison’s equally foul-mouthed V, though the form is very different.

I struggle to find comparisons with other poets in reading this collection; though some of the techniques remind me a bit of the British Futurist/Cubist poet Mina Loy, especially in a poem like ‘Moon Time’:

up (agate) and around

which recall her ‘Lunar Baedeker’: ‘A silver Lucifer / serves / cocaine in cornucopia’. Closer to home, I can think of poets such as Geraldine Monk and Maggie O’Sullivan, and Griffiths has affinities with a whole range of British experimentalists including Cobbing, Mottram, and Adrian Clarke, for instance. Like them, he’s largely not difficult in the sense of using very specialised vocabularies (like Prynne, say) but his mix of registers, his speed at times, and the fact that he’s often trawling up fairly obscure subject matter can make him difficult to get used to. His use of long serial poems (as here, in ‘Rousseau and the Wicked’,) connect him a little to the poems of the American Jack Spicer, but with if anything an even fiercer vision.

Bill Griffiths’ poetry is fascinating, wild, and very heterodox. Before reading this collection, I had become increasingly fascinated with his work because of that wildness, which is nevertheless tied to a strong discipline. In his best poems, there is not a word that doesn’t earn its place. I recommend this heartily to the adventurous among you.

Write Out Loud Middleton at the Ring O' Bells tonight ►

it even made me read the Baedeker thing :)

Steven, a rather splendid and highly informative review that has whetted my appetite for the poet. I love the way you are able to reference his work to other that of other poets. Thank you.