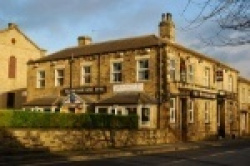 Cleckheaton was previously only noted for the production of textiles and midget gems; and having its railway station nicked. Until, that is, the arrival of Talking Zebras, a curious mutation from their African cousins, usually represented in black and white rather than, with this Yorkshire variant, with spoken words.

Unlike plains zebras, the tyke type meets in herds only sporadically, specifically the first, third and fifth Saturdays monthly, 2.15 for a 2.30 start. There, at watering hole the Wickham Arms hotel, pictured, they ruminate on each other’s poetry.

So successful has this live poetry group become, they have now produced an anthology, in black and white - Talking Zebras: selected poems.

The open poetry movement – (or spoken-word, live poetry, open-mic) is a huge phenomenon in the UK and elsewhere, its precepts few yet vital; that events should be egalitarian, encouraging and open to all. Such an approach, often criticized as “dumbing down poetry” in Write Out Loud’s early days, encourages people from diverse backgrounds, styles, and degrees of progress up the developmental ladder, to share their writing in good company. It is often the richness of that diversity that is noted by attendees, inspiring them to write more and experiment with new ideas gleaned from fellow open-micers.

This eclectic poetry collection exemplifies some of the best of the live poetry movement with people’s sometimes ordinary stories in their own, extraordinary words: travel, trivia, the madness of modernity, cris de coeur, memoir, familial love, perspectives on a precarious world, moments of quietude, witty riffs on quotidian daftness, and the pain and pleasure of producing poetry.

The anthology perfectly reflects live poetry in action, not least the pleasure of hearing a writer’s own voice, rhythms and inflections, a privilege you don’t easily get from a printed page. On the other hand, there’s rarely a second chance to catch the words at a reading. Here, we can read and re-read some the poems and, thanks to its accompanying CD, discover how they sound when read by the writer.

Live poetry can be liberating for writers less confident in such niceties as poetry punctuation, scansion, or even spelling; it’s how it sounds that counts. And yet there are times when you hear a good poem whose writer is not confident at reading out loud and whose words work better on the page. Talking Zebras’ book/CD combination provides opportunities for both.

It’s impossible to do justice to all 54 poems, and inevitable that your reviewer’s interests narrow the focus. Barbara Schiff’s ‘My Father’s Journeys’ particularly drew my attention, not only because of my own father’s journey from that part of the world in the same period, but also for its resonances with current migration crises: “I pray that all of us may meet again some day… our parents cruelly murdered … the police questioned me/They thought I was a spy… I am one of the lucky/I think of all the slain/I pray that we shall never see/Such horrors come again.”

Judith Stones’ ‘Spoilt for Choice’ reminds of a more prosaic contemporary concern: how to order a cup of coffee, faced with what purports to be choice: Espresso, Latte, Capuccino? Colombian or Brazilian? Full-fat, semi or skimmed?  Such restrained rants are, thankfully, a staple of poetry sessions, allowing us to grieve communally for disappearing worlds, without getting maudlin.

John Ling, a highly regarded poet on the West Yorkshire circuit, captures the linguistic tic of the “dour Yorkshireman” archetype, in’ A Man of Few Words’: who “sees all, hears all, says nowt/ except for this – ‘Yerreight?’ ... we wave the word at each other/like a password when we meet.”

Linda Kurowski’s ‘Love is a Yorkshire Stranger’ is also lovingly based on lingering linguistic curiosities such as “reet bobby dazzler”, “blether” and “mithering”.

Catherine Everett loses her head to music in ‘Clarinet Dreams’, where clarinets dream “of serenading her/with wanton chords/shivering in the darkness”, which might have saved Philip Beverley’s piano from its fate: “sinew wires and cast iron bones/brittle under a ball peen hammer… …the object played Danse Macabre/as we bounced its bits over the quarry wall”; all of which begs the question, whence its title, ‘Object of Worship?’

Playing with words is one of the delights of writing for reading out loud, of which David Lindsay is a master. He’s a superb entertainer, with his prolific memory and assured delivery, and interesting, if bizarre, ideas. Who else would write from the perspective of the person responsible for sticking decapitated noodles on pikes, as he does in 'Keeper of the Heads': "Then they send the heads to me/parboiled/dipped in tar/beautifully macabre." If you don’t get David’s point, be glad.

There is escape for Jim Saville’s readers in the elegiac ‘Oasis’: “There’s a place in every city/not even the best maps show/where the going’s always easy/and the pace is always slow.” With a hint of Yeats’ lake isle, we are reminded of that simple delight: the sudden, city snicket silence as you duck down the alley less travelled by.

Escape and liberation are lyrically presented as Trevor Alexander’s sensuous ‘Time and Tide’ seems to hold a conch to our ears: “Soft sand between toes … Briny bouquet / Of timeless ocean / Sea swirling over rippled beach/Gentle waves/Of time/And tide/receding.” I swear I heard Kirsty Young ask for my next record.

It is inevitably invidious, trying to fairly represent the whole of this collection’s offerings. Let’s let John Ling’s ‘His Daily Bread’ sum it up:

words for breakfast, words for lunch,

words to chew and words that crunch,

words with spice and savoury filling,

words for life and words for killing,

At £6, it’s a snip for such a fine introduction to an exemplary group of poets and poetry activists, not least in the way they engage with their community through local festivals and other events: poetry of the people, by the people, with half of the proceeds going to the local Kirkwood hospice. Congratulations to David Lindsay and Jim Saville for getting this material together. I recommend it to all who support the work of this and similar groups, and those wanting to learn more about how live, open-mic poetry works.

That's great - thank you so much for this generous review.

We're now in a position to sell these online -

Or maybe join us at one of our meetings and save the postage!