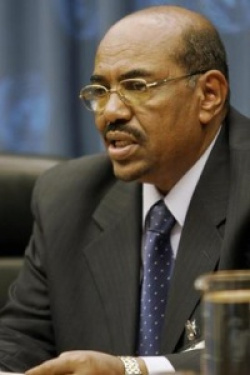 from the way of the righteous.

Toying with the offspring of the faithful.

Tempting their small minds from the true path.

Surely this is wickedness.

about our glorious dictatorship.

The name of the prophet bears down

on the flayed backs of the ladies

before our sweet sharia court

to the cheers of the faithful,

the beloved of Allah, the merciful.

Men of honour rejoice at the thrashing

of the adulteress so wicked to get raped.

Bearing the gift of death

the thundering hooves of the janjaweed

bear down on the kaffir Darfuri.

Our cleansing will surely please

god and his messenger.

Bearing the gifts of our Islamic state

our people travel in piety.

From rags, hovels and empty bellies,

the prophet will bear them to paradise.

Whoever insults religion shall be denied such reward.

Gillian Gibbons convicted of insulting religion. Gibbon is an ape. Kufr is unbeliever. Kufr are categorised by some muslims as descendants of pigs and apes.

2001-DEC: Sudan: An 18 year-old pregnant woman, Abok Alfa Akok, was accused by her husband of adultery. She claimed that she had been raped. The man co-accused with Abok was not tried due to lack of evidence. She was tried, even though the country claims that Sharia would not be applied to non-Muslims. In Sudan, a married person found guilty of adultery is executed by stoning; an unmarried person receives 100 lashes. She had no lawyer, and was unaware of her rights during the trial. She could not speak or understand Arabic, the language of the court. The Court of Appeal in Southern Darfur overturned the death sentence and sent the case back to the lower court which set punishment at 75 lashes. By immediately executing the sentence, she was denied her right to obtain legal advice and/or an launch an appeal prior to the beating.

I try to keep a focus. I regularly attack the stupidity and misbehaviour of my own government and its friends, so I consider it some sort of responsibility not to ignore the far worse abuses carried out by some others.

The criminal Sudanese regime is responsible for the murder of hundreds of thousands of people in Darfur and the systematic rape of thousands of women. This revolting regime represses its people in the name of Islam. That is the biggest possible insult to religion. Far greater than any insult that I could deliver. When a well meaning teacher is imprisoned, and even threatened with death, they shame and ridicule themselves. Now let the international community stop the rape, murder and torture by this illegal regime.

OK Malcom this is brilliant! I really liked the bear touch...did you mean to do it? As for the latest story of grace from such a hell, the teacher. poor lady, I wonder if the kids get beating's for naming it ? You know I really try to have an open mind, but the more I hear of them/that place, the more a massive pig blood drop sounds like the best idea. They should thank Allah everyday that Im not the president. I have known for years about these people, and they are so back ass ward, I get enraged! Great poem, got me pissed off!