Ocean of difference? American and UK poets read together at the Troubadour 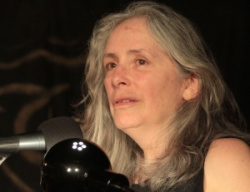 Is there a great divide between Anglo and American poetry? Or are there more similarities than differences? Dangerous territory on which to generalise, of course. But there was a chance at the Troubadour on Monday night to make some kind of assessment when three US-born poets and three from the UK took part in a reading titled Across Oceans. A seventh poet, American Robert Peake, could be said to have a foot in both camps – he has lived in the UK for the last five years, and his collection, The Knowledge, refers to the encyclopaedic understanding of the capital’s streets expected of London’s traditional cabbies.

Anne-Marie Fyfe, organiser of the Coffee-House Poetry series at the Troubadour for the last 19 years, and her husband and fellow poet CL Dallat regularly visit the US to read their poetry and hear American poets. She said on Monday night: “We seem to spend increasing amounts of time there,”   the contacts they make facilitating the staging of transatlantic poetry events at the Troubadour.

Batting for Britain, so to speak, on Monday night were Kent-based lecturer and former actor Geraldine Paine, and two members of Bristol poetry collective The Spoke – Claire Williamson and Paul Deaton – with pamphlets recently published by Eyewear.

In the Stateside corner were D Nurkse (New York), who has published 10 collections; Boston-born Joshua Weiner, who grew up in New Jersey; and  former art teacher and sailor Lynne Hjelmgard, pictured, top, who moved to Denmark in 1971, and now lives in London and Copenhagen, her locations possibly muddying the international waters a little more.

So what united the poets? Poems about nature, as you might expect, and fathers as well. The use of moths as an image occurred on at least three occasions. 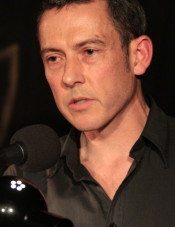 The poems from the three English poets were all unsettling, in their different ways, as good poetry should be. Geraldine Paine’s ‘Morning Men’, ‘Release’, and ‘The Creek’ – gentlemen at loose ends, a peek through a broken fence, a woman who wanders off to die in estuary mud. Claire Williamson introduced ‘The Hanging’ by saying that it was written 13 years after a family tragedy. Paul Deaton, pictured left, acknowledged the element of darkness in his work with a quote from Prospero; and a poem about an owl heard on Dartmoor that “knows the nights’ hollows better than me … can find in the black blindness what it needs to find.”

The poetry of Lynne Hjelmgaard in A Boat Called Annalise, a recollection of a journey she took with her husband across the Atlantic to the Caribbean and Europe, is outward-looking and affirmative: “In evenings there will be Venus and / in mornings there will be a sea freshened moon.”

Joshua Weiner said he had been trying to write about the refugee crisis in Germany and Europe, and delivered other poems that referenced an ancient Egyptian protectoress of fertility, whose additional job was guardian of the gate that leads to the underworld; and the wide-sweeping title poem of his latest collection, The Figure of a Man Being Swallowed by a Fish.

D Nurkse has written on human rights issues and worked with Amnesty; his view is that modern history began at Hiroshima. A poem about being interrogated in Afghanistan has the lines: “He pulled the trigger but I know it is just a technique to soften my resistance.” But there were nature poems, too: hiking into the countryside with his father, and ‘The Granite Coast’, written in the voices of crabs and snails. “I was so sick of consumerism and terrorism, the natural world is so much more interesting, “ he told the Troubadour audience.

US-born Robert Peake, who now lives in Hertfordshire, offered the view of an American abroad, puzzled by the appearance of the Queen’s royal coat of arms on a box of British matches, yet relishing the street names of old London in ‘The Knowledge’: “Lamb’s Conduit and Buttery Mews, Occupation Road … a medial fissure called The River, which flows sin-black, gorgeous … a goulash of rat runs and corner cuts.” 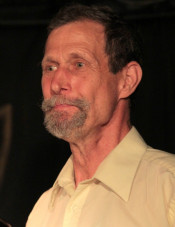 The final poet who read, Dennis Nurkse, pictured right, paid tribute to Anne-Marie Fyfe’s unstinting work with Coffee-House Poetry, and the quality of her own “haunting” poetry, warning: “If you want to be invisible as a poet, help other poets.”

Regular trips to the States made by Write Out Loud’s director Julian Jordon, and his championing of the Poetry Foundation’s American Life in Poetry feature, now a fixture on this site, has encouraged Write Out Loud to look beyond these shores. We now carry a number of US poetry events on the Gig Guide, too.

There is always music at the Troubadour, a nod to its past when the likes of Paul Simon and Bob Dylan played in the same space where poets now read, and Simon lived for a time across the road, above the long-gone launderette.

On Monday night Henry Fajemirokun performed Kathy’s Song, one of the most beautiful of a number of songs Simon wrote about his English girlfriend Kathy Chitty, who he met when she was selling tickets on the door of a folk club in Brentwood: “I gaze beyond the rain-drenched streets / to England, where my heart lies.”

◄ 'In the shadows where the milk-chocolate river unfolded ... we'd strip'

Liverpool and London, we cover the waterfront ...

Well, what can I say? it sounds like one hell of a fantastic night; another Troubadour gig I have missed and feel I should have attended. One day, I shall get there, to see what my old mum enjoyed on those glorious folk evenings of the 60s and 70s. Maudlin state not aided by your inclusion of those lyrics. And another superbly written review, Greg. Someone should tell the Pulitzer people about you.