In the aftermath of the Calder valley floods, a new poetry press is born 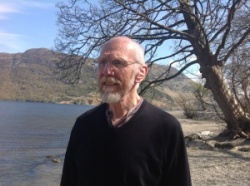 A couple of weeks ago an event took place in Hebden Bridge that was rich in symbolism – for poetry lovers, at least. A pamphlet by Peter Riley, who was shortlisted for the Forward prize last year, was launched at The Book Case, which had only just reopened after the floods that devastated parts of the Calder valley last Christmas.

The pamphlet, Pennine Tales, a series of 24 twelve-line poems, was published by Calder Valley Poetry, which launched its first pamphlet back in January, when the valley was still mopping up after the floods.

The poet and publisher behind Calder Valley Poetry is Bob Horne - pictured beside Ullwater in the Lake District - a retired teacher and also former milkman and stonedresser, who with John Foggin also runs the Puzzle Hall Poets in Sowerby Bridge.

He said:  “Calder Valley Poetry started as an idea a year ago. It was a suggestion of Simon Zonenblick's after I'd assisted him in putting together a pamphlet of Nuala Fagan's poems, Not All Birdsong. The possibility germinated through the summer and came to fruition with John Foggin's collection Outlaws and Fallen Angels. I was feeling my way here but I've known John for 30 years and we had a great time organising the pamphlet, which was launched in January. It had unexpected repercussions.

“Steve Ely had written a blurb for Outlaws. When he saw Outlaws he was kind enough to contact me to say he was impressed with its appearance, and was I interested in publishing a pamphlet of his. Of course I was. Another absorbing period of designing, exchanging emails, discussing, which saw the launch of Werewolf a month ago.

“The poetry network worked in my favour again when Peter Riley got in touch to say he had a pamphlet which he hoped would be published by someone local. (He heard about me from Steve when he - Peter - wrote some blurb for Werewolf.) Pennine Tales was launched a fortnight ago.”

Another pamphlet, Mark Hinchcliffe's The Raven and the Laughing Head, will be launched  in Huddersfield on Thursday 19 May, two days after the Calderdale launch of Werewolf at The Blind Pig in Sowerbyr Bridge, where the Puzzle Hall Poets also now meet.

Bob added: “I have about a dozen projects in the pipeline. What has pleased me most has been the reaction of people to the appearance of the pamphlets, both externally and internally.” He did a poetry MA at Huddersfield University in the mid-90s, and “wrote some poems then but didn't write any more after the course finished until about three years ago”. After retiring he co-wrote two local history books, and did some cricket freelance journalism, covering Test matches for Channel 4 and Channel 5 websites, as well as writing papers on the social history of West Riding cricket, especially in the 19th century, for academic journals. His poem 'The Cricketers at Keswick' was included in a cricketing anthology that was launched in the Long Room at Lord's, and his first poetry collection, Knowing My Place, will be published by Caterpillar Poetry in July.

Books have always played a big part in his life. “My wife and I used to sell secondhand books at fairs, then on the internet. Most of the rooms of our house are full of books. To produce something which I like to see and feel, the contents of which are so impressive, is a thing of beauty.”

Calder Valley Poetry’s mission statement on its website is worth quoting. It announces its intention “to produce pamphlets by the many fine poets living alongside what was once referred to as Yorkshire’s ‘river of industry’. These are writers who have a casual, even indifferent, attitude to publication. Coaxing, threats, blackmail will be employed, where appropriate, in order to provide them with the wider readership they deserve.

“However, far from being parochial, Calder Valley Poetry will also pursue the poets of Kirklees and the Colne valley. And once across the watershed, who can tell where, in years to come, its grasp might reach? Or what’s a small press for?”

Write Out Loud invades the south at the New Inn tonight ►