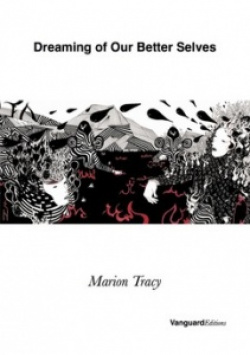 Death and illnesses are central to human life, and the determinedly contemporary approach Marion Tracy brings to this collection is balanced by depth of experience. Tracy began writing poetry as an adult after 30 years teaching in further education. When her own children left home she spent some years in Australia, and only began writing poetry in 2005.

Publication in Australian magazines was followed by further poems in such magazines as The Rialto, Poetry Wales, and Tears in the Fence.  In 2012 Happenstance published Tracy’s pamphlet Giant in the Doorway, which looks back on her experiences first as a child then as an adult living with, and trying to understand, the effects of her mother’s psychiatric illness. Dreaming of Our Better Selves is her first full collection,

Tracy speaks in a fully contemporary poetic voice. ‘Young girl with a tree in her brain’ allows the unnamed “she” to see “the lit up neuronets” in her own brain. ‘Virtual’ plays on different ways of constructing reality and the poem ‘Human’ takes the form of a check list, with “dreaming of a better self” one of the indicators of being human.

Many of the poems start from the quirky and interesting:  ‘Pictures placed on high shelves in hospitals’ builds on a real investigation of out of body experiences; while ‘Living Statues’, a sequence of three short poems, uses the disguises taken by pavement artists to talk about friendship.

A wry academic humour comes through, most notably in ‘Grammatical second person talks back’, where “You” is “so over it with epiphanies, swallowing ego is becoming/ increasingly uncomfortable…”. "You" gives us a tightly written 21-line quietly astute rant, to be recommended for inclusion in the next anthology of writing about writing.

The collection as a whole is divided into three sections. These are numbered, but only the second is given a title,  ‘The Dreamer’. This is where two poems from Giant in the Doorway,  ‘Banshee’ and ‘Alteration’, are placed.

‘Banshee’ shows a woman whose illness has made “a booking for death”, behaving with frightening inconsistency as “banshee spirits her away/ won’t let my mother change her mind/ won’t let her spit the tablets back into the box/ won’t let her reach upwards/  in slow motion, to grasp and ride again/ her own warm body breathing.”

The poems in this section can be read as a sequence about Tracy’s mother, identifying her with ‘The Sleeper’ who seems not to “hear voices on the other side/ of the ward, our footsteps”, while she is “moving away from us/ as if she were … a child of spacemen travelling/ for generations unable to remember/ what she was trying to find.”

If the mother is the Sleeper, is she also the Dreamer, humanly “dreaming of a better self”? While these poems strongly evoke mental dissociation and painful bewilderment, at times I found it difficult to see what was happening or to locate the point of view, and found my own lack of understanding frustrating.  ‘Hearing Voices’ starts: “We just wanted to be noticed/to be nearer to her than anyone …”  In this poem, who is the “we”?   Is it ‘The Voices’ or the poet speaking for the distressed child watching her mother?

In the pieces I enjoyed most, emotional involvement with the subject, though often left opaque, is tempered by the intelligence that gives an accessible setting for the ideas being shaped.   For example ‘Mr and Mrs Death’ plays with the myth of Persephone, but this mythological reference gives Tracy a way to write about a puzzling relationship that nevertheless feels human.

This is a limited edition of 200 copies, with the first 50 signed by the author.  You can purchase a copy (£7 incl p&p) via PayPal using: vanguardeditions@gmail.com

Richard III, Jamie Vardy, and all that: call for poems about Leicester ►