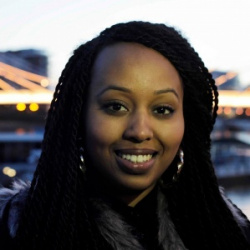 The work of a Somali-British poet is reaching a huge new audience after being featured in US pop singer Beyoncé's new video album. Beyoncé reads parts of Warsan Shire’s poems, including ‘For Women Who Are Difficult To Love’, ‘The Unbearable Weight of Staying (the End of the Relationship)’ and ‘Nail Technician as Palm Reader’ between songs in her new video album Lemonade.

Writing in the Guardian, Rafia Zakaria said: “Truly, Shire was a brilliant choice for Beyoncé’s unapologetically black and female album: like the people and places from which they are woven, Shire’s poems – published in a volume titled Teaching My Mother How to Give Birth – are laden with longing for other lands and complicated by the contradictions of belonging in new ones. In ‘Conversations about Home’, she writes: ‘I tore up and ate my own passport in an airport hotel. I’m bloated with language I can’t afford to forget’, and: ‘They ask me how did you get here? Can’t you see it on my body? The Libyan desert red with immigrant bodies, the Gulf of Aden bloated, the city of Rome with no jacket.’ “

Warsan Shire was the first Young Poet Laureate for London, and has won Brunel University’s African poetry prize. Her poetry pamphlet, Teaching My Mother How to Give Birth, was published in 2011 by flipped eye, which will also be publishing her first full collection later this year. Her ‘War Poem’ is included in the Poetry Society book The Pity, commissioned to mark the centenary of the first world war.

◄ Could yours be some of the lines that make up Dylan's Great Poem?

'Airways, Breathing, Circulation' by Peter Knaggs is Poem of the Week ►