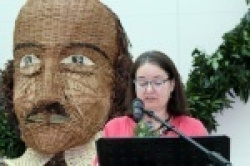 Saturday 23 April marked the 400th anniversary of William Shakespeare’s death – and the poetry world put on events across the country to celebrate the bard’s words.

Poetry ensemble Live Canon have commissioned 154 contemporary poets to each write a poem in response to one of Shakespeare's 154 sonnets. On Sunday 24 April, in a six-hour performance from 10.30am to 5.30pm at the Victoria and Albert museum, Live Canon will launch the publication of the poems with a performance of all 154 sonnets and all 154 responses, in the V&A's National Art Library. The drop-in event is free.

Meanwhile in the Midlands “poetry posties” had been out delivering specially-designed postcards with a sonnet by Shakespeare on one side, and a new poem inspired by Shakespeare by a leading West Midlands poet on the other. The initiative by Writing West Midlands and BBC local radio was aimed at every person who lives on a Shakespeare Road, Street, Drive, Crescent or Close across the region.

And on Tuesday 26 April poets, singers and Shakespeare enthusiasts are invited to come and perform their own work, read some of the Bard's sonnets or extracts from his plays, sing Shakespeare's words set to music or just enjoy listening to others, when Worcestershire’s poet laureate, Heather Wastie, teams up with poet Sarah Tamar for a Mouth and Music Shakespeare Soapbox, at 7.30pm  at the Boars Head, Worcester Street, Kidderminster. The night will also feature Tudor musicians A Merrie Noyse. Entry is free.

'The way we need to learn to live with wasting' ►