Clasp: late modernist poetry in London in the 1970s, Shearsman 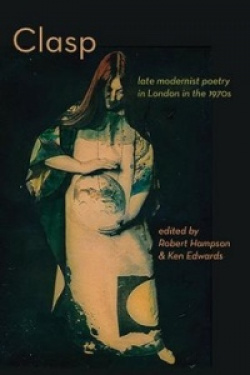 London has been a very important centre for experimental, late modernist, avant garde, linguistically innovative, whatever-you-call-it poetries since the 1960s. Not the only place, as a previous volume from Shearsman (Cusp, edited by Geraldine Monk) makes clear, but this shows just how much was going on.

Usually, it seems to have taken place in community centres, back rooms of pubs and for a while, in the offices of the Poetry Society in Earls Court, where Bob Cobbing ran the print room and Eric Mottram edited the Poetry Review, and when, for a space of six or seven years, the radicals took over. Influences from the American Beats, Black Mountaineers and the San Francisco Renaissance seeped in and took many poets along with them. The staid and Movement-influenced poetry establishment was rocked on its heels for a  few years, before the inevitable “return to normality” when the Arts Council threatened withdrawal of funding.

This book is part of an attempt to tell the stories of those times, from the point of view of the participants. The editor calls it “an act of collective remembering” rather than a history, and I think it’s important to see it not as a full account, but as an inevitably biased but compelling tale of poets trying to carve a space for themselves in an environment that was either indifferent to them or openly hostile.

There is a dominant narrative about English poetry that goes Thomas Hardy, Edward Thomas, WH Auden, Philip Larkin up to Andrew Motion, then on to Carol Ann Duffy and Simon Armitage. This book – and its companion, Cusp - disrupts that nice neat line and says, actually, this was happening too. It wasn’t the only other thing happening – Stephen Watt’s account includes a brief mention of the Communist-inspired Federation of Writers and Community Publishers that I was involved with in the 1980s – but it was as much a place where good poetry could be found as any establishment organ.

That it was wilder, less disciplined and often variable in quality goes without saying. Apparently, the Poetry Society in the 1970s could be a raucous place, and the amount of material coming out of Writers Forum - and other publishers probably includes a fair amount of forgettable stuff. There were over 500 Writers’ Forum publications in all formats, but largely using the duplicator in the basement of the Poetry Society, involving every kind of poetry from concrete to free verse, some of which, such as the early work of Paula Claire and Lawrence Upton, would challenge the boundaries of what could be called poetry. Claire’s Stone Tones, for instance, was a series of “textures” taken from pebbles, flints and pumice, to be later “vocalised” in performance.

There is a lot of reference to the Poetry Review in this book, which for six years was full of both American and British experimental poets, and towards the end was being produced in the duplicating room in an A4 format. Within its pages could be found Basil Bunting, the earliest publication of Bill Griffiths, the minimalist poet Aram Saroyan (whose most infamous poem is ‘lighght’ – that’s the entire poem. It caused questions in Congress.) The Poetry Society’s committee apparently was a riot of argument and controversy, and the parties were legendary. Before the Arts Council decided to cut the funds, and caused a lot of animosity and a kind of retreat back to the shadows, it was a bit of a Wild West frontier town.

Only four of the writers in this book are women, which reflects perhaps the situation at the time. None of them are black either, and it would be interesting to know what black British writers were doing in the 70s. Elaine Randell’s essay (she was on the Poetry Society council) reflects a kind of frustration with the macho posturing of the male writers on the council, and Frances Presley expresses a similar frustration with the nearly-all-male atmosphere at the reading series Sub-Voicive. Geraldine Monk has elsewhere said that a lot of the readings were in upstairs rooms of pubs that in the 70s were often male enclaves. There were a few women about, however, and it would have been good to hear from more.

But alongside the Poetry Wars (documented in a book by the critic Peter Barry) there were reading series such as the New River Project, Sub-Voicive and others. Some of the writers were very much part of the scene, others more peripheral, but they were often to be found in Better Books or Compendium Books, where a lot of these often fugitive publications were available.

This book is going to be essential to the telling of the story of British poetry in the 70s and beyond. It takes for granted that poetry can be exciting, innovative, can include sound poetry, concrete poetry, free verse, be open, raucous, quiet, simply difficult and difficultly simple and anything it wants to be. I recommend this book to anyone who feels that poetry ought to be exciting, challenging and fun.

◄ 'The way we need to learn to live with wasting'

Steven,
while attending Union meetings in London In the mid sixties I went to a few poetry readings at Earls Court Square.

At one I remember a ragged looking bag woman (complete with canvas bag) who read some wonderful poetry in an impeccably high-class accent.

At another I went downstairs and through the closed door I could hear Cobbing intoning his wails and stuff ( I decided not to go in.)

On another I read a poem about abortion and a male nurse went through a description of the whole process for me.

Eventually, a tall girl in thick woolen leggings with different coloured legs (wearing a witch-like cloak and pointed hat)
insisted on taking me along to the Troubador...which was very dark and threatening - looking.