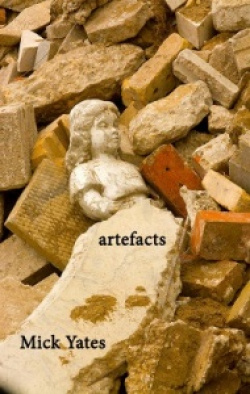 The books under review here are all published by Indigo Dreams, a Devon-based press which publishes 50 poetry books a year. The press also runs the annual Geoff Stevens Memorial Poetry Prize which the first two of these books won in 2014.

Mick Yates’ debut collection artefacts is commended on the back cover for its wit but these are largely sad poems, preoccupied with the passage of time, history and small lives lived in the shadow of that history. We are told that Yates, a former teacher and lecturer who lives in Cumbria, was most recently a carer for his parents and other relatives and perhaps it is those experiences which lend the poems their pathos.

Yates’ poems are well populated, with characters from Roman boy racers to Beat poets and an uncle who spends his days travelling round and round on the Circle Line in a fruitless attempt to buy more time. These characters are frequently battling the sorrows that life brings: “chief luther standing bear and his Sioux braves/endure the spectacle trapped in sad eyes” (‘wild west show’) “these days the kettle never boils  nobody calls/not even his own flesh and blood” (‘cold callers’).

artefacts has virtually no capital letters in it. Nor is there any punctuation, except for the occasional question mark. (On re-reading I thought that Yates could have lost the question marks as well, as often enough the question is indicated by the preceding grammar). Of course, the effect of leaving out punctuation is to emphasise the importance of line endings as kind of punctuation, and Yates is good at enjambment. Consider this: “his back bent/a curved question mark/demanding an answer’ (‘memento mori’), or this: “to visit checkpoint charlie/is to stand divided” (‘berlin snapshot 2011’).

There are a lot of poems here with single-line stanzas. Or perhaps they are double-spaced lines? It is not a form I had come across before, and not one I think will enter the canon of literature. Another drawback is the occasional overblown metaphor where unnecessary lines deflate the impact. For example, in the final stanza of ‘love hearts’ two lines could be cut to strengthen the poem: “until she met an older man/of more sophisticated taste/who offered her parma violets/and she was lost to me ‘Forever’ “ could be more simply ‘until she met an older man/who offered her parma violets”.

These poems capture the breadth and sad ironies of human life but my favourites were ‘dead beat’ and ‘magic bus’ where the sadness lifts and instead the poems celebrate the Beat Generation: “hey allen ginsberg/you were the man”. 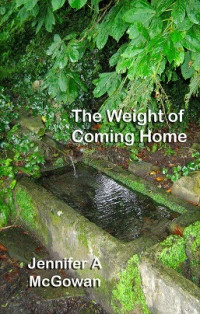 Jennifer A McGowan’s The Weight of Coming Home, is also a debut collection, from a transatlantic poet with degrees from Princeton and the University of Wales. McGowan, who has chapbooks published by Finishing Line Press, was certified disabled at 16 with Ehlers-Danlos Syndrome, which is characterised by loose and fragile skin and joint hypermobility. McGowan wishes the reader to take her condition to take into consideration when reading her work - it is highlighted on the back of the book - and several poems address her health directly.

McGowan’s poems are largely dominated by the authorial ‘I’, seeming here to correspond directly with the poet herself, addressing not only her health but also stories from her family history and specific geographical locations, New England and the Malvern hills where “At floods’ peak/elvers glissando down Church Street” (‘Mosaic Dreams’). A handful of other poems concern figures from mythology and literature such as Penelope and Virginia Woolf, in ‘A Soldier’s Wife Rents Talland House’ where the eponymous wife watches another war drag on in the Middle East while “In the garden, Virginia pockets more rocks”, a lovely, concise representation of the tragic repetitiveness of human conflict.

The poems come in all shapes and sizes, from short eight-liners to two-page, three parters. They are written in a narrative style where sound is a particular strength. In ‘Oxford High’: “English comes in snatches, intermittent and vague,/its lilt at cross-purposes with other tongues:/a summer haze.” And in ‘Tidings’, the lines are peppered with assonance: “Peregrines still prey by the cathedral;/kestrels weather on nest ledges”.

McGowan shares with Yates a tendency to over-salt her lines: in ‘I. Grasshoppers’, a poem about caged grasshoppers, she finishes: “I had come to abhor restraint”, a sentiment quite clear from the preceding lines. Some of the language is also a bit slack: the “urgent, tender hands” in ‘Reach’ are generic, and the “white, tile-boundaried world” in ‘Chronic’ is clumsy. But in the best of these poems, where the poet has allowed the poem to grow into itself, language and meaning fly together. The final poem in the collection, ‘Skywise’, a three-part poem about a country woman taking brief respite from her life, finding union with the earth, is very powerful. “Now/the rustle of stalks whispers percussion/to the cicadas’ heavy drone.” 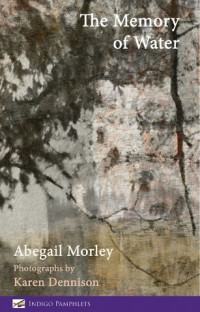 Probably the strongest of these three books is the last: Abegail Morley’s pamphlet The Memory of Water, based on her residency at Scotney Castle in Kent, as might be expected from a poet whose debut was shortlisted for the Forward prize for best first collection in 2010. Morley’s fourth collection is due out soon, she was poetry editor for The New Writer for four years and has collaborated with artists on ekphrastic projects with the Royal Academy of Arts.

The central metaphor of the 22 poems in this pamphlet is that water – in Scotney castle’s medieval moat – can absorb history, allowing a careful listener to hear its echoes. This intention is set in the first, title poem: “Water cannot lose its beginnings, memory crouches/in its black pockets”. The pamphlet is also threaded with poems with a more contemporary touch, a love story, or the poet considering her childhood move from Canada to the UK.

Unlike the other two poets, Morley makes use of more regular form: there is a sonnet in here, and almost all the other poems have regular stanza lengths which vary from couplets to seven-line verses. Perhaps because of the subject matter the poems are unusually focused on bodily sensations of touch: lots of wetness, but also “rubbed-smooth stones”, “the slits of the moat’s velvet cloth”, the “bulky weight” of water, “gutters overfill, torches choke” and so on.

The poems exude a strong sense of place and Morley has a particular gift for bringing the castle to life with powerful imagery. Reading this pamphlet brings a sensation of being absorbed into the fabric of the castle itself.

Perhaps what these three books share, aside from a publisher, is a consciousness of the past (English/Welsh/American) still at play in the present. In a time of rapid change, as we face an uncertain future, it is salutary to remember where we come from and how history lives within us.

Jennifer A McGowan The Weight of Coming Home, Indigo Dreams, £7.99