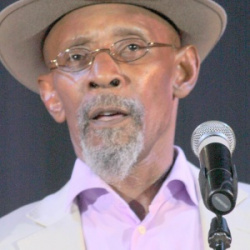 Dub poetry legend Linton Kwesi Johnson will be performing at Liverpool’s month-long WOW (Writing on the Wall) festival next month. Johnson, the first black poet to have his work included in Penguin’s Modern Classics series, and awarded a Golden PEN by English PEN in 2012 for lifetime literary achievement, will be appearing with spoken word and YouTube star Hollie McNish, whose new book, Nobody Told Me, about parenthood, was published earlier this year.  The show is on Saturday 7 May at 8pm (doors open 7pm). More details

And that’s not all – on Wednesday 4 May Liverpool’s own Dead Good Poets Society will be holding a night of “imagined futures” at the Blackburne House Garden café at 7.30pm. More details

◄ Write Out Loud's first Poem of the Week: 'The lovers' by Mike Watts

Yes yes yes! Can not WAIT for this!!