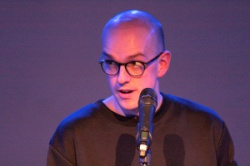 The idea was: pair 30 poets with 30 writers at risk from regimes around the world, and commission new work from each of the free writers to draw attention to the plight of those that are not free, or under threat. The poets stood up at the English PEN modern literature festival at Rich Mix in east London on Saturday to deliver their responses, in an event created and curated by the poet SJ Fowler.

Award-winning poet Andrew McMillan, pictured, was paired with a jailed poet with one of the highest profiles at the moment: Ashraf Fayadh, a Palestinian accused of renouncing Islam, whose death sentence imposed by a Saudi court was replaced with an eight-year prison term and 800 lashes after a worldwide outcry.

McMillan’s response was ‘A Week of Living Blasphemously’, in which he listed the kind of things he had done in the last week that “would have got me into trouble in another country”. They included encouraging a friend to leave her husband, and holding his boyfriend’s hand as they walked past “football-charged blokes”. His conclusion was dark: “I am weak from privilege … I could renounce you in an instant to save myself”.

Harry Man, pictured right, opened the first of the afternoon sessions – you could almost say he was the warm-up man - with a funny and surreal poem about Burmese poet Maung Saung Kha, who was recently arrested and charged after publishing a poem on Facebook which said that he had a tattoo of the president on his penis. During its transition to democracy after decades of military rule Burma has supposedly abolished censorship.

One of the most moving moments during the afternoon sessions came with the screening by poet Lucy Harvest Clarke of a YouTube video showing Chinese poet, artist and human rights defender Liu Xia being visited in 2012 by supporters while under house arrest. During tearful scenes she whispers repeatedly in the ear of one of the activists. She has been under illegal house arrest since 2010, when her husband, the writer and activist Dr Liu Xiaobo, was awarded the Nobel peace prize, according to Amnesty International. 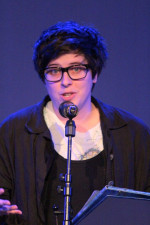 Tsering Woeser is a Tibetan writer living in China who has been harried by the authorities for a number of years. Eley Williams, pictured left, was able to get in email contact with her, and Woeser sent her a poem that Williams read out at the festival, and then one of her own in response. In her email Woeser spoke of her “unpredictable” future, but added that she ruled out any compromise with the authorities, who have banned her books and restricted her movements. Stephen Emmerson was unable to attend the festival owing to flu, but sent along an mp3 which consisted entirely of the kind of noise that might be used in torture, in support of Honduran journalist Dina Meza. SJ Fowler sat on the ground with his back to the audience, tearing up pieces of paper, during a film-poem in support of jailed Azerbaijan journalist Khadija Ismayilova. The second afternoon session – I was unable to stay for the evening one – concluded with Caleb Klaces on Cuban dissident Jorge Olivera Castillo, in which he referred to “Guantanamo … home to US, and Cuban, torture”.

You can find the names of all the festival performers and the writers they were paired with here. Many of the predominantly young poets I hadn’t heard before, and it was good to see them all standing up there, producing work that in more than one case they said had been difficult to write.

With some readings, there was a lack of introductory context about the writer at risk, and it might also have helped to have a picture and name of each one in turn up on the screen. But English PEN’s first festival of modern literature, with free entry, was nevertheless a bold, educational and imaginative initiative to engage our privileged artistic community with the much riskier world beyond. I do hope that it will be repeated.

◄ 'He liked to watch the old houses stir awake'

Well done, PEN. A simple idea, but – as so many of the poets discovered – also one which challenges us and takes us out of our comfort zone. And keeps vulnerable writers in the public eye.