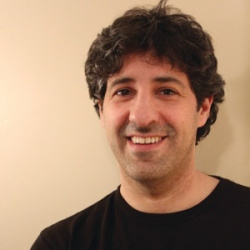 An American freelance editor living near Syracuse in New York has won the £5,000 National Poetry Competition. Eric Berlin’s poem ‘Night Errand’ was praised by judges Sarah Howe, Esther Morgan, and David Wheatley, who said that it “wouldn’t let you move on, but demanded a pause to dwell and recoup, followed by the compulsion to read it again. This is poetry that can somehow, magically, fill a cafeteria napkin dispenser with emotion … ‘Night Errand’ dramatises a cry of pain at the damage we’re capable of doing to others. "

The winning poem explores a sleep-deprived father making a dash to the shops on a mundane errand, a flash of anger, and the shame that follows. The setting is a mall in upstate New York.

Berlin said: "Receiving such interest in this poem about a lonely moment of overwhelm – a moment so uneventful I almost didn’t give it a second thought – reminds me to trust turning inward as a way of reaching others, not just being understood but also understanding that others have endured uncertainties too. In that bleary first year after the birth of our baby, a baby we’d tried for years to conceive, and who only came after we’d given up hope, mourning and laughter have both been important as ways of getting close to each other.”

Here is the winning poem:

of frost-heaved spaces so vacant I could cut

straight through while blinking and keep my eyes

shut, I’ve come like the flies that give up the ghost

at the papered fronts of your defunct stores,

through the food court where napkins, unused

to touch, are packed too tight to be dispensed,

past the pimpled kid manning the register

who stares at the buttons and wipes his palms.

If I press my eyes until checkers rise

from the dark – that’s how the overheads glower

in home essentials as I roam through Sears,

For this window crank I brought, you show me

a muted wall of TVs where Jeff Goldblum

picks his way through the splintered remains

of a dinosaur crate. There must be fifty

of him, hunching over mud to inspect

the three-toed prints. I almost didn’t

come in here at all, driving the opposite

of victory laps, and waiting as I hoped

for the red to leave my eyes, but my urgency

smacked of your nothingness. I did it again –

I screamed at the woman I love, and in front

of our one-year-old, who covered his ears.

◄ Char March at Write Out Sale at the Waterside tonight

Write Out Loud at the Old Courts in Wigan tonight ►

more bitter than angsty - the poem that is - I enjoyed it. I don't figure the merit of these things in their price or prize anymore, but there is a grim pleasure in weighing up the judges' report. Take that as you will.