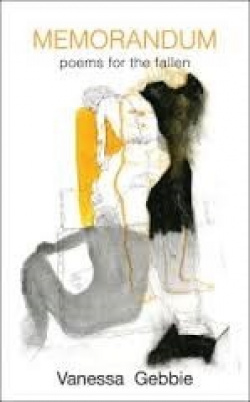 What is there still to say in poetry about the first world war? Vanessa Gebbie, a Welsh writer living in England who has won awards for her short stories, flash fiction and poetry, including the 2012 Troubadour poetry prize, has toured war memorials, graves and battle landscapes to record her own tribute.

In the first section of Memorandum she visits a series of London memorials, at places such as the Royal Academy (Artists’ Rifles), Euston and Waterloo stations, Smithfield market, London zoo, and Poplar school.

At Waterloo the poet imagines a shell-shocked railwayman … “the scream / of a train at full pelt / is nothing if not a shell … / They quiet him then, / take him by the arm”. (‘Blindfold’). The poem ‘A Special Occasion’ commemorates one of those half-forgotten, curious tragedies; the death of 15 children at Upper North Street school in Poplar in June 1917, in the first fixed-wing air raid over London: “A world where grown men / drop bombs on children / out of a sky as blue / as the robes of Our Lady.”  Sadly this could equally be about many other children, in other war-torn places, today.

We move on to other memorials, beyond London. For poetry spotters and trainspotters alike, there is ‘Playing Trains’, in memory of 18-year-old Maurice Turner, a driver with the Royal Field Artillery, buried in the churchyard at Adlestrop: “Maurice comes home today. He’d have loved /   to see it … / The Station Master and the signalman, / waiting for his train. An unscheduled stop.”

There are more literary references. ‘Exhumation of Isaac Rosenberg’ reveals that the man regarded as a leading war poet, who died on patrol on 1 April 1918, was initially buried in a mass grave. Years later the bodies were exhumed and moved to a permanent resting place: “The clerk, not knowing what I knew, asked / if it was correct that one of these eleven men / was a wordsmith”.

‘John Kipling at St Aubyns’ refers to the portrait of Rudyard Kipling’s only son that hangs in his old school chapel, “close to those of men I didn’t know, as if / we who fell in the same war / ought to rub along well.” John’s poor eyesight meant that he failed his army medical, but his father used his contacts to secure a place for his son as an officer in the Irish Guards. This short, resonant poem adds:

In the sitting, I was advised

to remove my spectacles, as they

and my hat cast too many

the photographer had already

The pity of war. There are two further poems about the village war memorial, which has John Kipling’s name inscribed on it, at Burwash in Sussex, close to Rudyard Kipling’s Bateman’s home. One of the poems, ‘Rooks’, includes these lines:

If, as the papers say, there will be

where your boy died,

and his name is engraved there as well as here,

how will he know which place is his

when he has no bones to come home to?

But this collection is far from being just about the celebrity fallen. ‘Against regulations’ is for another bereaved parent, Anna Drurie, who after the war took her son’s body home to Canada in a suitcase. ‘Unknowns’, written after walking the cemetery “stone ranks”, imagines “the unknowns leave with you, / walk in that silence alongside, / slip a hand into yours,/ an arm about your waist, as it / you met in a village dance”. Another poem is titled ‘To a Welsh tunneller killed in France in 1916, whose body still lies 40ft below ground’.

The poem ‘Butterflies’ is located at Serre Road, No 2 Cemetery, on the Somme battlefields, and is a reflection on those short-lived creatures who “feed as though each meal will be / their last … / This one was born at dawn. I saw / it emerge from its wrappings, sit / in the sun, thinking. / Reluctant to fly / in case flight was as final / as going over the top.”

‘Mosses’ looks at those memorials in neglected corners of municipal parks, in the voice of a natural reource used to tend wounds, an old soldier’s trick: “We staunched their blood, / cushioned shattered limbs, cleansed their wounds, were / kinder far / than salt”. It goes on:

Now, we grow in shadows where plinth and paving meet,

among litter, needles, cans that once held beer. We live

on rain, on dust, on the piss of drunks

This collection, a work of extensive research and empathy, is a reminder of the huge variety of war memorials that exist, and their importance to us; lest we forget. Vanessa Gebbie has found something new and worthwhile to say in poetry about war, in a way that is both moving and unsentimental, and that also widens and refreshes our understanding of that terrible conflict.

'He liked to watch the old houses stir awake' ►