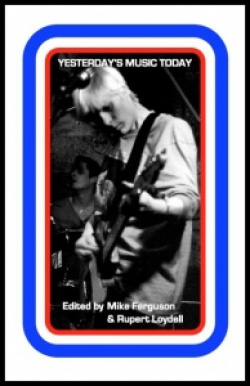 This is a wonderfully varied anthology that, like a good compilation tape (remember those?), never settles down into the obvious, and can veer from Billie Holiday to the psychedelia of Gong in the turn of a page. There’s a wide variety of styles too, from an elegiac sonnet by Angela Topping to a very near pure sound poem by Sue Birchenough which begins:

and continues in this vein to the end, while playing with typography and making reference to the song Black & White. Similarly, Mike Ferguson’s ‘Mostly Metal’ fills the page with every sub-genre of heavy metal one could wish to know.

At the other end of the scale is Norman Jope’s entertaining narrative about Brummie rock band Black Sabbath, where:

from across the road had developed a thirst for the blues –

had found a style for itself, the singer had spread his arms

had rode the airwaves…

The range of styles is so varied, in fact, some might find it bewildering; rather like if you had a compilation tape in which Bach was followed by free jazz. I like the mix myself; and am firmly of the belief that one should always try to expose oneself to all kinds of music, all kinds of poetry and all kinds of art. I don’t suppose that anyone reading this anthology will enjoy every single poem here; but there is still something for everyone.

I’ll leave you with just a short list of my own favourites here (apart from the ones mentioned). I like the poems of Robert Sheppard, and I’m glad I read the poems of Mario Petrucci sampled here. Sarah James’ poems were very engaging, and I liked the long prose poem about Beethoven on the motorway by Jay Ramsey. Some names were new: Ester Muchowsky-Schnapper and Jimmy Juniper both brought unfamiliar musics to me.