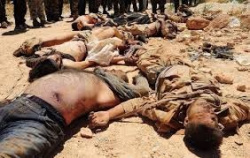 in his occupied territory.

about a weight, a burden, something.

we disciples could not hear clearly,

what with all the muffled explosions

this man, this man, he screamed out ‘NOT AS I WILL BUT AS YOU WILL FATHER!’.

but there was no other man there, no father, nothing.

Was this man drunk?

I do not think so.

But he may have drunk some wine

pause in the battle, to hear the cock crow

but roosters had been eaten, long ago

what with the siege and the starvation and whatnot.

John,
I must have missed this first time round, (I`ve been `agonising` a bit myself recently and can`t do much?)

This `take` on the ongoing situations which were part of the evils that Christ was agonising about at that time is very apt in both place and modern reference...(and also the three cock crows !)

Just prior to the actual time of Gethsemane Christ had been drinking...wine...at the last supper (now there`s a thought)

Brilliant work. I look forward to this catch-up very much. How have I missed you!