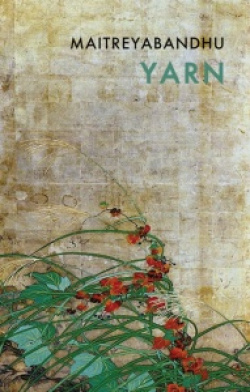 I can remember the first Maitreyabandhu poem I ever read. It was in a collection for a competition of winning and shortlisted work. It was about some mules and, though rated as “selected” only, I thought it was much better than the actual winning poems. Better? Its close observation, its playful way with words, its elegance, its simplicity.

This led me to buy his first collection The Crumb Road (wonderful title). I note that the reviews of that book used phrases like “enriches our attention”, “the potency of quiet expression”, ”alert and attentive”. The values in these phrases are the ones I personally seek and cherish in poetry.

Yarn, a larger collection, consists of four sections, each with a different tone, emphasis and subject matter. There is a sense here of Maitreyabandhu extending his range and attempting new musics.

The first section has a strong Buddhist feel. There is a homiletic quality to some of the poems which I found disappointing

the given world: whatever seeds

we plant will grow in time –

the error bred in the bone, the daily rancour

our clever ways to be unkind

Perhaps it’s my cynicism that makes me resistant to this sort of stuff, but I felt there was a weakening of the imagination here. I give you for your delight the following: “the rick of thought”, “the dolphin of depression” and “the beach ball of delight”.

‘The Cattle Farmer’s Tale’ is one of three lengthy poems in this section and the problem in this poem is not so much the imagination as the diction. In the line “The suckling calf that’s yoked unto his mother”, it’s the “unto” that does it, or rather, undoes it.

Again, “Bring him the best. He is worthy of the choicest gifts”, works best if delivered in the sort of accent known to actors as ‘Mummerset’ – a fictional folk idiom meant to represent the West Country. Or, “I bade her fetch the kummasa and rice.” It’s a long time since I bade anyone to do anything. This archaic verbiage sits with a kind of modern street talk – and not in a good way. For example: “If you want to rain, rain god, then go ahead and rain.” Or try “I’ve had my work cut out.” Or “I never heard a bad word said about her.”

You might argue that Maitreyabandhu is looking for a looser, more colloquial feel in this dramatic monologue. You might, but frankly I do not buy it. For me it’s a playground for bathos.

‘Aaron’s Brother’, another long poem from the final section of the book shows that he has learned some lessons from Browning about incorporating the quirks and twists of direct speech into poetry. The technique is better though the poem itself seems to start in the middle of nowhere and ends up in virtually the same place - a criticism which, to be fair, you could also make of Browning’s less successful monologues.

There is a third long poem called ‘The Travellers from Orissa’ and collectively these three reminded me of those Frost poems where he moves from his lyrical mode to longer narratives of New England life and its characters.

The comparison is not, I believe, fanciful in that Frost is explicitly referenced at least once as indeed are many other poets whose influence (mainly benign) is apparent, such as Herbert, Hardy, Wordsworth. If you want evidence read ‘The Guest’ for Herbert – even the title is a giveaway; ‘I thought of Love’ for Hardy; ‘ Five years On’ for Frost; I would even see AE Housman in ‘You’.

There are, in addition, explicit references to Edward Thomas, Tomas Tranströmer, Louis MacNiece and Robert Haas  - this last one involving a lovely affectionate joke about him.

The second section is a series of elegies to a fellow Buddhist who died in 2009. In these poems Maitreyabandhu reverts to that simple, sensuous, playful and reflective mode that drew me to him in the first place. Here he is at the end of a poem where he is going through the belongings of his dead friend:

And your watch – the split across the strap

Where the buckle wet

Still marking the size of your wrist

Perhaps we see a truer spirituality here where the poet observes an item of our humdrum world and listens attentively to what it has to say to us. In this series of elegies, poem after poem carries this quality, or perhaps more accurately this quality carries poem after poem: ‘Souls’,’ Zofia’, ‘His Funeral’. In the latter poem he describes the wake of his friend who is laid in an open coffin. He concludes it:

The pulling of long faces had to end

We dried our eyes. Unlike you, I suppose,

To be so quiet in a room so full of friends.

This is wicked – an affectionate sort of insult that can only be made by a deeply trusted and loved friend. ‘The Pianist’s Name’ combines simplicity and an elegance that goes beyond any of the models I have cited  and yet recalls the way both Hardy and Frost can make a big poem out of the slenderest of material.

Throughout the volume he experiments with form. The most successful of his rhymed poems  ‘Colwall’ is also in this section. He uses rhyme and a unique stanza pattern in a distinctly Hardy-esque manner. Elsewhere his rhymes are less convincing. You can see his syntax twisting awkwardly to set up the rhyme which when it comes arrives like the damp squib, ‘Two Birds from Kabir’ being a case in point.

The third section has absolutely gorgeous affectionate and unsentimental childhood memories. His prose poems in the final section have a muscularity that suggests new lines of poetic development. And although I have been unkind about the dramatic monologues he does produce an absolutely brilliant gripping narrative called ‘Historia’.

'To crease a sheet of paper is to change its memory' ►