Competition closes in 25 days, 18 hours. Get details and Enter. 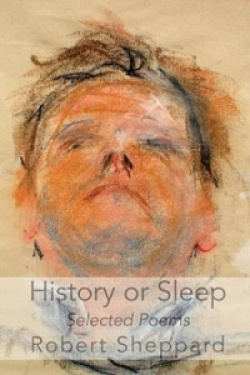 Robert Sheppard is probably one of the most important poets writing in Britain at the moment. A big claim for a poet you’ve probably never heard of; but I think I can justify it. He is important as a leading member of the grouping of experimental poets that have been called “linguistically innovative”, and as a thinker about what experimental poetry is and does at this point in literary history.

But the poetry itself, not just the criticism, is what he will be remembered for. And it’s a challenging, but not insuperably difficult, read that is mind-stretching and often surprisingly lyrical. The lyricism though is hard fought for; especially in the extracts from his major work, Twentieth Century Blues, which was a 10-year project in which everything he wrote was fitted into this “network” or even “root-system” of connections between poems and strands of poems radiating out and around the history of the 20th century. Thus, in poems like ‘Empty Diary, 1926’, we have references to significant events like the Great Strike of 1926:

We push cars on their sides, jeering

smoulder outside the depot’s gates and

but this is more than just description; there is a strong political awareness, both of the world and of the way language is used to limit as well as expand awareness.

Sheppard is constantly reinventing what a poem can do. In this comparatively modest selection, there are 100-word sonnets, prose poems, “fictional poems” (poems as written by an imaginary poet), and two sections from his book of “autrebiographies”, Words Out of Time (a book you should also try and get hold of, by the way) as well as free verse. There is political verse such as the unrhymed sonnets of Warrant Error (say it fast).

“Restless energy” is the phrase that comes to mind, but even that doesn’t convey the nature of these poems. Sheppard’s craft is meticulous, but it never stays in one place for long, is constantly on the move looking for the next linguistic package to deliver what he has to say. Here’s the first verse of the first section of ‘The Lores’, a central section of Twentieth Century Blues, ‘Book 1: Time Capsule’ to give a flavour of the speed of it:

Note how the three-word lines compel the reader to work out the syntax while they’re reading, and also moves them on down the poem without giving them time to rest.

This is an important collection; but it’s only a taster of the whole body of work. I could go on to talk of his investigation of the poetics of sex in his poems after Rochester, or his understanding of music. This book constantly challenges the reader to think more and to see more. If you want to move beyond the mainstream, with its polite voices and constrained language, this is the book to take you there.

Review » Litany of a Cardiologist: Denise Bundred, Against The Grain