Competition closes in 15 days, 18 hours. Get details and Enter. 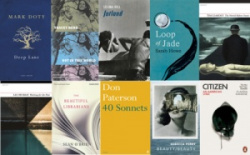 The annual event to celebrate the shortlist for the T.S. Eliot Award 2015 took place at the Royal Festival Hall, hosted with humour - and a number of cravat jokes, the result of a conversation with a cabbie who thought poets still wore them -  by the irrepressible poet and broadcaster Ian McMillan.   According to Twitter,  rumours that McMillan will next year be replaced by Johnny Depp are unfounded!

The shortlisted titles chosen by the judges from 142 entries were:

Selima Hill has been nominated previously but not won.  Her poetry deals with the  unspoken secrets – even violence – which shiver beneath the surface of ‘normality’: ‘my father leaves for his other life as God.’

Two new names have appeared this year: Sarah Howe and Rebecca Perry.   Sarah Howe gave a spellbinding delivery of her work – without the book in front of her. This is a feat I would consider impressive in a room over a pub -  but remarkable to be able do this at your TSE award debut!  Her collection Loop of Jade  concerns itself with familial roots, journeys  and connections between cultures, “shadowed by blackened, soaring, towers of the mind” .

Of Rebecca Perry’s book Beauty/Beauty, host Ian McMillan said her poetry ‘repairs broken language with gold’ a lovely image of the power of the written word, taken from the poems.

The evening galloped along helped by some rapid fire delivery and animated performances particularly from Mark Doty, Sean O’Brien and Don Paterson, who made the whole room laugh with a story of when he got stuck in a lift with no light.   He had, he said, only been going to the first floor! It must have been hellish experience so why did we all laugh?  Perhaps sometimes you have to.  It did make for a powerful poem, as do the worst experiences.  Paterson’s book 40 Sonnets has already won the Costa book award, and the poet continues to examine form, structure, and the contemporary relevance of the sonnet.

Claudia Rankine’s Citizen: An American Lyric has already won the Forward Prize 2015.  Ian McMillan said of her work that it examines what a poem can be and looks at the relationship between the words and the white space on the page.  He added that her work,  like the mask of Janus, looked both backwards to the traditional lyric and forward to the future of what the lyric can be.  I have not yet been able to read Citizen but understand that it contains short prose, essays, art and photography, as well as poetry.

The winner will be announced on the evening of Monday, 11th.