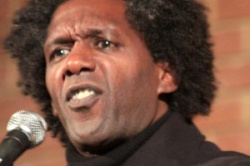 Lemn Sissay talking about his childhood in care on Desert Island Discs with Kirsty Young has been included in BBC Radio 4’s Picks of the Year by Robert Peston. In the same week as the broadcast went out Sissay was elected chancellor of Manchester University. On Desert Islands Discs he talked, often with great emotion, about his childhood – being given up into foster care by his Ethiopian mother who needed to complete her studies; going into a care home at the age of 12 after his foster family no longer wanted him; leaving care at the age of 17 and funding his first self-published pamphlet of poetry from his dole money.

He now works with young people leaving care, and said: “If you want to know how young people in care feel, get them to write poetry.”  He told Kirsty Young: “I don’t think as an artist you need to have a terrible story … the most important lesson I learned is to let go of it all…. I have to live in the present, not the past.”

The music he chose included Amazing Grace, Aretha Franklin singing Bridge Over Troubled Water, and BB King’s Better Not Look Down. Sissay said: “I believe that if you reach for the stars, you get to the top of the tree.”