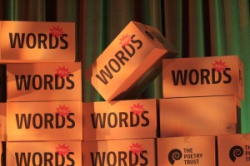 There is a question mark hanging over the Aldeburgh poetry festival - in the eyes of many, the best poetry festival in the country - after its organisers, the Poetry Trust, announced swingeing cutbacks because of the trust’s “precarious financial position” in the light of “the difficult funding situation in the arts”. In a statement the trust said the situation posed “a threat to the future of the Aldeburgh poetry festival”. It laid out the huge cuts that it has been forced to make, saying: “We are no longer in a position to have a full-time director and the role of director has ceased. The rest of the team will also be leaving at the end of the year, for other opportunities or because their posts were closed. In addition to this, the Poetry Trust will be leaving its office at The Cut in Halesworth [in Suffolk] from the end of December.”

Although it said that “this is certainly not the end of the Aldeburgh poetry festival”, it added: “At this stage it is too early to answer if there will be a festival next year.”

The Poetry Trust had previously received Grants for the Arts lottery funding for 2012-15 fromArts Council England. The trust said it was working closely with “key partners” to “effect a successful transition into a newer, smaller structure. The Poetry Trust’s related activities – the Fenton Aldeburgh First Collection Prize, the Aldeburgh Eight Seminar, the Poetry Prom and the Suffolk Young Poets Competition – will all be reviewed in the light of our future structure and costs.”

In recent years the festival, which was founded by Michael Laskey in 1989, has been based at Snape Maltings, with additional events and exhibitions held in Aldeburgh.

The trust added: “Please be assured we are absolutely intent on maintaining the existence of our festival, along with its excellence. A showcase for poetry and poets from around the world, a commitment to new voices, a close engagement with poetic craft – these are all the things you care passionately about and which we want to see endure. But we need to do this on a secure financial footing."

The Bookseller quoted Arts Council England as saying: "The funding that the Poetry Trust has received between 2012 and 2015 has been for specific projects, within different funding programmes and for fixed amounts rather than continuous funding. Therefore they are not losing funding as each amount of funding has been applied for by the organisation for specific outcomes."

Antonia Byatt, director for literature at Arts Council England, said: “The Arts Council believes that poetry as an art form is an important part of the literature world, and the Poetry Trust produces inspiring work and a festival that brings poets from around the world to audiences across the country. We hope that the organisation can develop a successful new structure as part of its review and it will be eligible to apply for project funding in the future such as grants for the arts.”

Thanks, Steve! We certainly appreciate the support you give to this site. And congratulations on a recent poem of yours appearing in the Morning Star, too.

Quote shocking news about Aldeburgh, it's true. Let's hope they can come up with a formula to make sure this wonderful festival still takes place next year.

Sad news. The current round of cuts in support for the arts illustrate another aspect of the hollowing-out (imho) of our society. Aldeburgh isn't going to be alone in having to cut back its programme, I'd wager.

This makes me even more appreciative of the sterling (and often unsung) work done by WOL to give poets a platform where we can share our work and learn from each other. Thank you.