Life & Death in a Northern Climate

by Stuart A. Paterson 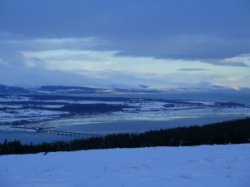 LIFE & DEATH IN A NORTHERN CLIMATE

It's all downhill from the Aultnamain Inn

the Dornoch Firth a sluggish curclicue

A wind with gold-capped teeth

snaps at my face as down the hill

I slalom into Edderton, awash with

today a well-met friend for me.

Folk have died in these conditions

they'll tell you, been found rigid

under trees, in roadside sheughs

by such cold. But I am tough,

of a breed well used to out-staggering

death with every lurch on days

a white refusal to be brought

to creaking knees by something altogether

as banal as freakish weather.

Back home later, heated by

I dwell upon the myth of Scottish bravery,

close eyes that have only just stopped running,

stretch out legs still galloping away

from what the news reports as

pump the air with spectral fists.

Being dead doesn't get any better than this.