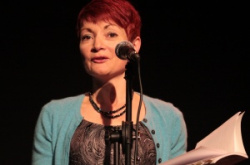 Diana Barnato Walker, who delivered 260 Spitfires and many twin-engined bombers during the war,  was convinced she had a guardian angel, in the form of a badly-burnt pilot. Lettice Curtis ferried almost 1,500 aircraft for Britain’s Air Transport Auxiliary (ATA), including more than 400 heavy bombers, and was a founding member of the British Women Pilots’ Association. Dorothy Furey, one of the first female American pilots to be hired by the ATA, went on to breed racehorses, and to take up scuba diving at the age of 77; Marion Wilberforce gave up flying, reluctantly, at the age of 80.

The stories of these and many other women pilots who delivered planes during the second world war were told in poetry by Alison Hill, pictured, at the launch of her collection, Sisters in Spitfires (Indigo Dreams) at the Landmark arts centre in Teddington, south-west London, on Thursday night.

‘Diana’s Nine Lives’ recounts Diana Barnato Walker’s many brushes with death, including being attacked by a German gunner over Berkshire, missing a windsock with inches to spare, breaking the rules by going up to 12,00 feet to avoid thick cloud, refusing to bale out because she was wearing a skirt  … the pilots were at the mercy of the British weather as well as enemy aircraft.

The press didn’t quite know what to make of the “air women”. Did they lack charm, wondered the Daily Express, as if that was the one thing that mattered.  Maureen Dunlop was Picture Post’s cover girl, “stepping fresh from a plane. / A breeze ruffling her curls, / she graced every breakfast / table, set many hearts aflame.” By 1941 the Evening News was saying that ‘Courage Counts, Not Glamour’: “Courage to take / a test flight, courage to say yes to the ATA, / courage to fly any number of types of plane / with only the Ferry Pilot’s Notes at hand.”

Joan Hughes “once doubled as Lady Penelope, flying / a Tiger Moth under a motorway bridge, / landing in court on seven separate charges.” (‘That Magnificent Woman’). In ‘Brooklands Swing’, there is undoubted glamour: “They’re in the mood – swirling / the dance floor, hands skimming / hips, scarlet lipstick glossing, all /eye-linered nylons & vintage chic / … Diana wafts by, Lettice strides / the other way, ready for the sky.”

There are sombre moments in this poetry collection, too as there must be. ‘On Such a Day’ reacts to the loss of Amy Johnson, “waiting for news that never fully surfaced. / We knew in our hearts she was gone.” ‘Tell Me’ says simply: “Tell me it wasn’t in vain – the sorties, / the fight for recognition, the press attention, / endless ferrying from factories to frontline.” And the bitter-sweet feeling at the end of the war, “perhaps wondering if the most exciting / part of our lives was behind us.” (‘A Rapid Dispersal’).

The glamorous spirit of the evening, with members of the audience encouraged to turn out in 40s dress, was reinforced with two sets from The Spitfire Sisters, a splendid harmony trio with many recognisable and some not so well-known songs from the period, parading in trim uniform in the first half of the evening, and transforming themselves with marvellous evening gowns in the second half. Plenty of scarlet lipstick, too, to evoke the tension – as well as the adventure - of the blackout. The stage was set with an old-fashioned typewriter and wireless, a gas mask kit, and vintage-style microphones.

The inspiring evening, at this time of Remembrance, was completed with some wartime poems from two guest poets – Chris Hardy of Little Machine, the group that sets poems to music and often appears at poetry festivals, and your own correspondent, very happy to be part of such an event.