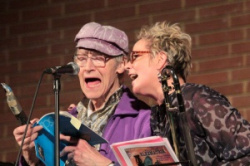 It was billed as the Poetry Olympics Enlightenment festival - and I hadn’t really known what to expect. I did know that veteran poet Michael Horovitz , who put together the Children of Albion anthology of underground poetry in the 1960s, and who features at the beginning and end of the BBC’s recent Rhymes, Rock & Revolution, as a kind of benevolent grandfather and representative of continuity, launched his Poetry Olympics in 1980, as a protest against the political storms surrounding the actual Olympics of that year, and also because he maintained that poetry in Britain, exemplified by the likes of Philip Larkin, was at an all-time low.

Musicians Damon Albarn and Paul Weller have collaborated with him over the years. One of the touchstones of Horovitz’s credo is poetry’s interaction with all forms of music, and in particular, jazz. The New Departures All Stars Band – Peter Lemer, Alec Dankworth, Clark Tracey, Ian Smith and Knoel Scott - kicked off the night at Kensington town hall in exhilarating style, and returned at the end to close the show. Ayanna Witter-Johnson, accompanying her powerful, soulful voice with a cello, included Rope Ladder to the Moon, a song by the late Jack Bruce, of Cream, whose regular collaborator on lyrics, Pete Brown, was also on Saturday night’s bill, reading from his forthcoming new collection.

Horovitz produced his anglo-saxophone – “my trusty comrade on most gigs”  - to accompany his renditions of poems, occasionally sung, including one by Adrian Mitchell and another by his own son Adam, absent because of flu, which imagines the welcoming party for Mitchell after his death: “Ted Hughes looms like a cliff in the distance.”

There was also Horovitz’s own ‘Soho Awakening’, written after “coming out of the old Ronnie Scott’s club in Gerrard Street”, which includes these lines, “in a pool of petrol / all tones dance,”; a short poem by Allen Ginsberg, one of the prime movers of the 1965 Albert Hall happening – “a famous and strange community gathering”, as Horovitz put it; and an excerpt from Horovitz’s own A New Waste Land,  “written during the Blair years”, that also recalls sheltering from German bombs in railway arches in suburban Cheam during the second world war.

Vanessa Vie emphasised the esoteric and eclectic, at one point exclaiming “Bedlam, bedlam, bedlam!” in such a way that I felt compelled to note it down, and also performed a couple of duets with Horovitz, in which her warmth and affection for her fellow performer was clear.

Two skilled but quite different young poets - Cecilia Knapp, who can be seen performing her ‘Howl 2.0’ at the Roundhouse earlier this year in the aforementioned BBC programme, and Kayo Chingonyi, who started out as an MC of garage and then hip-hop – introduced the second half.

Annie Whitehead, a former member of the famous Ivy Benson Band, on trombone, and Jennifer Maidman, on guitar, delivered a couple of excellent numbers, before joining Michael Horovitz and Pete Lemer to form the William Blake Klexmatrix Band. The combo’s repertoire included a calypso version of William Blake’s ‘The Tyger’, and their take on Blake’s ‘Ah! Sun-flower’. At one point Horovitz encapsulated his philosophy, rooted in some of the more lasting ideals of the 1960s:  “Let’s do all we can to overcome the blue meanies who just want to slug things out.”

One of those who has succeeded in overcoming his personal blue meanies is the inspiring poet Lemn Sissay, who at the end of a week in which he had been installed as chancellor at Manchester University, and taken part in a memorable edition of Desert Island Discs, found the time to leave friends midway through Saturday night, despite their entreaties, to pay his own respects to Michael Horovitz and the Poetry Olympics.

When he appeared, time was running out, and he was only able to deliver two poems, although one was of epic length – his spiritual allegory of recovery and redemption, ‘Morning Breaks’, which concludes with the realisation that “I can fly”. He also talked of the need to overcome that “feeling of not being quite good enough”, which he said writers faced every day.

That chimed with the sense of informality, warmth and fun that I took away from Saturday night’s happening. Michael Horovitz’s often clangorous personal musical instrument – his anglo-saxophone, or glorified kazoo, sometimes strangely reminiscent of the song of the humpbacked whale – might not get past the gatekeepers of quality control, but offered a sense of continuity with the chaotic Albert Hall happenings from 50 years ago, and an endearing wackiness that the professionalism of today’s performance poetry and its often familiar style of delivery sometimes lacks.

It was a privilege to be there, and truly a shame that the audience was so sparse. Those who considered going but decided not to after all missed something - including the sight of the event’s mover and shaker, Michael Horovitz, this grand old man, this grandfather of Albion, jiving away at the foot of the stage as the New Departures All Stars played out the evening.

◄ Lemn Sissay, university chancellor: 'If you want to know how youngsters in care feel, get them to write poetry'

The consolation of art: poet who takes walks on the dark side launches selected edition ►