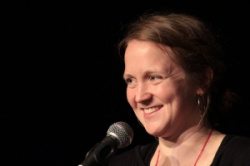 BBC4’s look at performance poetry and its links with music opened with footage from Wholly Communion, the film of the Albert Hall gathering of 1965, with Allen Ginsberg, Lawrence Ferlinghetti, Adrian Mitchell, Michael Horovitz and many more, and closed with the event masterminded by Horovitz at the Roundhouse earlier this year to mark the 50th anniversary of the Poetry Incarnation at the Albert Hall.

Poet and music lyricist Pete Brown, who attended both events, talked of his failure to understand TS Eliot’s The Waste Land, and said: “I wanted to bring my poetry to as many people as possible.” Forward prize winner Kei Miller and spoken word sensation Hollie McNish, pictured, referred to the lasting effect of Ginsberg’s Howl.

There were archival delights in this programme – John Lennon delivering some of his nonsense poetry from a lectern on the BBC’s Tonight programme; a very young Brian Patten, who as one of the Liverpool Poets with Roger McGough and Adrian Henri did so much to break down the barriers separating poetry from the people. McGough also performed a very simple kind of pop poetry with the group Scaffold.

Moving swiftly on, there was a look at Leonard Cohen’s transition from page poet to pop star; spoken word performer and musician Gil Scott-Heron was described as the “godfather of rap”;  and Patti Smith’s work was presented as a ”fusion of poetry, performance and punk”, with a quote from her poem ‘Piss Factory’: “I want to smell like boys smell.”

Punk music arrived in Britain. The bard of Salford, John Cooper Clarke had had an inauspicious start to his career, performing in working men’s clubs and on the northern cabaret circuit. Suddenly he found himself being described as a punk poet: “You can’t fight that kind of nomenclature.” Nor would you want to, although sometimes punk audiences were in no mood for poetry. “It’s a very extreme experience to have [so many] people hating you at the same time,” conceded JCC.

Phill Jupitus, aka Porky the Poet, said Cooper Clarke was the first punk poet he saw, supporting Siouxie and the Banshees: “Clarkey opened the door for everyone else.” Attila the Stockbroker talked of “amazing gigs … five minutes supporting The Jam”, but also having the directness and self-confidence to go out and perform on his own: “1-0 to the Ranters.”

There was the strange tale of the unfortunate and overhyped Murray Lachlan Young, the first poet to be handed a £1m record deal in the mid-1990s. But he didn’t quite disappear into the wilderness: nowadays he is a regular poet on BBC Radio 4's Saturday Live and resident poet on BBC 6 Music.

American poetry slams came to Britain in the mid-1990s, and were said to have eventually helped poets as different as Kei Miller and Hollie McNish – seen earlier – to attract attention.  Another spoken word star, Kate Tempest, was likened by McNish to the Beat poets, which brought the programme full circle, to the Roundhouse Reincarnation in May this year that celebrated the original Albert Hall happening in 1965.

To emphasise the links between poetry and music, veteran rock stars Jimmy Page of Led Zeppelin and Van Morrison were both at the Roundhouse event. Page also attended the Albert Hall in 1965, he mentioned to me at an event to celebrate the 150th anniversary of WB Yeats in June this year. Pete Brown went on to write the lyrics for a number of songs by the 60s supergroup Cream.

Many would argue that the story of performance poetry in the UK began way before the Albert Hall Poetry Incarnation of 1965. Lemn Sissay argues at the conclusion of this programme, part of the BBC’s splendid Poetry Season, that spoken word is on the crest of a wave. And who would disagree? Certainly, the story isn’t over yet. Greg Freeman

Background: Reincarnation of that Albert Hall spirit ensures the beat goes on

Difference and the death of Sophie Lancaster: Write Out Loud at Marsden tonight ►

Good question. I always thought there was.

I didn't know Slam performances started at the end of the 2nd century AD, I thought they didn't start till the 1990's (proofreading needed...)