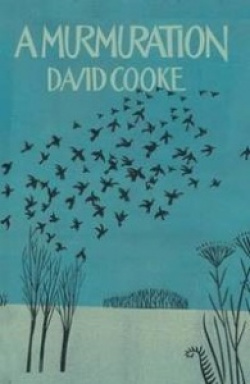 David Cooke is well known to and appreciated by regulars on Write Out Loud. He started out as a winner of a Gregory award, given to young poets, and has become a much-published poet who nevertheless continues to make use of this site to test out and find a wide audience for many of his poems. Thus, some of those in his newest collection, A Murmuration, published by Two Rivers Press, may well be familiar to Write Out Loud admirers of his work, as will many more from A Slow Blues,  new and selected poems that Cooke has assembled and published recently, which provides a comprehensive guide to his work over many years.

Cooke’s poetry generally looks outwards, not inwards, and often reflects a fascination with history, and historic objects. His Irish roots and love of Seamus Heaney are also apparent in his latest collection in ‘The Ice House’, with the language of “pick and spade” and of “rasping slither into pails” reminiscent of the late Nobel prizewinner’s line of country.

That almost weary sense of centuries of European history and wars is also apparent in ‘After Bruegel’: “The magpie on the gallows / has seen it all, but now / remembers nothing.”

Some of the most striking poems in A Murmuration concern landscapes, and what Cooke is able to read into them. ‘The Railway House’ concerns a long-derelict railway building. Some might merely romanticise this in terms of melancholy ruin and decay, but Cooke sees further, imagining the liberation of rail travel for the “fish-dock lumpers, / their pale-faced kids and wives, / sliding past on rails / to freedom and the Wolds.” He also recognises the power of nature, quickly regaining “a trackless pathway that rises up / on brambled banks, the abandoned / corridor prowled by foxes.”

This idea is repeated in ‘Cities’, where “there’s another city inside the city” – of foxes, badgers, moles and “a rackety slew of birdcalls”. It concludes by reflecting on the Khmer Rouge’s Year Zero in Cambodia, and the city of Phnomh Penh, and “how the jungle broke it up / when all its people marched away.” The tItle poem refers to the term for those spectacular and mysterious, sweeping and swirling formations of starlings: “Something is gathering / at the edge of the evening.” A walk on the wild side, a darkness on the edge of town.

Cooke has always written about his musical heroes, and the tantalising title of ‘When Smokey Sings’ draws you in. But on this occasion this poem is more about the occasion, attending discos as a shy schoolboy at the local Top Rank, when the mirror ball “became your ruling planet”, than his Motown heroes - the line “In the end the music got you” illustrating how tough it can sometimes be to capture the power of pop in poetry, even for a poet who usually hits the  spot.

We come back to the power of place in ‘Gasometers’, with the poet reflecting with resignation and a sense of loss on those  strange, waxing and waning industrial structures formerly seen on every townscape: “It seems that years are slow seepage. / They are colourless, odourless, tasteless, / as in some definition I once learned at school.” All this is put together in deceptively simple language and a steady, consistent rhythm and music that beckons you in to read poems that stay with you afterwards, and that you find yourself returning to. The cover design of starlings on the move, by Sally Castle, is a pleasure, too.

The publication of A Murmuration has more or less coincided with that of a new collection of David Cooke’s earlier poetry, A Slow Blues, comprising selections from his earliest collection, Bruegel’s Dancers, plus the more recent In The Distance and Work Horses. Among these are many gems that I continue to admire, including the poems about  jazz heroes  Charlie Parker, Miles Davis and John Coltrane, as well as ‘Grammar School’, ‘Shadow Boxing’, and ‘Fenians’, to name but a few. An additional section, A Virtual Tour, comes in the form of new, postcard-like poems, with Kingsley Amis’s “Nobody wants any more poems about foreign cities” ironically quoted as an introduction. It is a remark that Amis could have made to fellow little Englander, Philip Larkin. Cooke disproves the sneer with a journey that exemplifes his continuous curiosity and ability to pinpoint and understand.

◄ 'Poetry books will sell if people can relate to what you are writing': Attila the Stockbroker