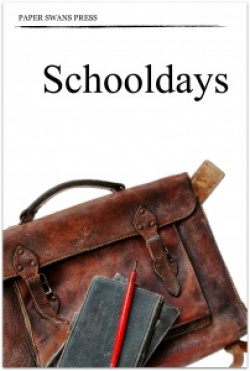 Schooldays is a new collection of poetry and flash fiction from Paper Swans, a recently launched, small independent press. The contents are accessible, vivid and thought-provoking and offer up fresh insights with repeated readings.  There are poems here about specific incidents, discoveries, acts of kindness and acts of cruelty, friendship and growing up, including one about skipping school altogether in favour of a game of snooker. The diversity of the thematic material and the way in which each piece is so carefully crafted make this collection a compelling read.

About one fifth of the anthology is given over to flash fiction and four fifths to poetry. There are writers from most parts of the UK and one from the US. All have fresh voices and all have something to say.

In the opening pages, Roy Marshall in ‘Aim Higher’ takes an oblique look at his school motto; Katy Ewing sifts through scratched desktops to find indelible evidence that past pupils have left behind  and Ed Broom recounts the moment he came to learn a hard lesson in maths. His poem, ‘Then It Hit Me’, at just four lines, is a model of economy and worthy of quoting in full:

about arcs and parabolas

I neither knew nor cared

‘til sir sent that rubber soaring

showing y to be x-squared

The anthology bears testament to the fact that schooldays are not necessarily the happiest time of our lives. There are pieces here about bullying, about small acts of cruelty and about the pains of growing up. In ‘On the Carpet’, Carole Bromley subtly portrays the experience of being summoned by the headmaster and made to feel small in his presence:

I can smell his coffee breath.

“I’m going to ask you one more time.

Was it you that stole from Woolworth’s?”

This anthology constantly reminds us how matters of small consequence can assume fantastic proportions to the point that they stay with us for the rest of our lives. Nina Lewis effectively describes one such moment in her poem ‘Ambiguous Answers’ when she relives the embarrassment of discovering that she has given the wrong answer to a question that in all honesty she thought she had answered correctly. The withering look given by the teacher lives on in that loaded last stanza:

I didn’t really know what “sour” was,

but the look you gave me

In ‘Snow Gift’ Gill McEvoy sensitively writes about being faced with a dilemma over whether to save a bird or be late for school. She saves the bird but faces the consequences. For me, it is possibly the most thought-provoking poem in the whole anthology and it is beautifully crafted.

Elsewhere, John Foggin, in his poem ‘Chosen Ones’, gives an evocative account of life at a boys’ grammar school where they “dreamed of girls / unreachable as the Pleiades”.

The editors are to be congratulated on putting together a first-class selection and for going the extra mile in organising successful launches in London, Oxford and Edinburgh.

Neil Leadbeater is an editor, author, essayist and critic living in Edinburgh. His short stories, articles and poems have been published widely in anthologies and journals both at home and abroad. His most recent books are Librettos for the Black Madonna (White Adder Press), The Worcester Fragments (Original Plus Press); The Loveliest Vein of Our Lives (Poetry Space) and The Fragility of Moths (Bibliotheca Universalis, Romania). His website is at www.poetrypf.co.uk/neilleadbeaterpage.shtml.

Goodbye to all that: poets plan farewell party at elegant live venue in Guildford ►