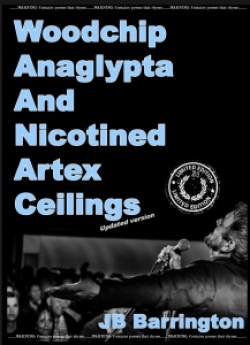 This updated, 2015 version of Woodchip Anaglypta and Nicotined Artex Ceilings, a collection of poems written and performed by Salford-born JB Barrington in an award-winning show, includes angry poems on behalf of the powerless, the kind of thing that might be regarded as almost obligatory from a performance poet. Nothing wrong with that, of course. But this collection reveals Barrington’s range as being wider and more original, with a prevailing tone of humour and nostalgia, for 1970s interior decoration, music heroes, and working-class pub culture.

Let’s get this out of the way first. As a southerner I feel I must question the depiction of the people of the home counties in ‘The Blistering Sun’, Barrington’s take on package-tour Brits: “The northern folk crack smiles and jokes / with a sense of finesse and flair / Then the sound of the south with a massive mouth / pollutes what was a calm sea air”.

He obviously doesn’t mean it, as elsewhere there’s an elegy to Paul Weller, one-time leader of The Jam, and a bloody southerner to boot, from Woking, Surrey: “You were the soundtrack to my adolescenece / You were my favourite subject at school” (‘The Boy Wonder’).

Probably the most effective of Barrington’s “angry” poems is ‘Don’t Look Down’, when he makes the clear, succinct case that “the vulnerable and weak” are not the ones responsible for society’s woes: “When your furrowed frown has you looking down / When you really should be looking up  / Up towards the ones that take the most away from you / and not towards the ones beneath / When they’re simply making do.”

On the other hand, ‘Is It Fair’ is somewhat less effective, even though the repetition of “it’s the same old” probably works better on the stage than on the page. Repetition can work, and does so in ‘There’s A Reason’, where the arguments and instances are focused, and boil down to a simple punchline that socks you in the jaw: “There’s a reason and the reason’s quite simple / It’s greed.”

Humour runs through this collection, in poems like ‘Me Mam Dunt Like To Text’, ‘I’ve Never Seen a Chinese Copper’, ‘Posh Nosh’, and ‘The Bingo Queue’. And I don’t think it’s stretching a point to say that the pub culture evoked in ‘The Dockers Christmas Eve’ reminded me of the closing-time talk in TS Eliot’s ‘The Waste Land’ - except that Barrington’s words sound more authentic.

There’s a long, moving poem, ‘First of the Ninth’, about a childhood friend who took a different path: “So I found my way and you found yours / Though yours weren’t where I wanted to be.” His mate’s downfall is documented – glue, crack, smack, “that shit up your nose” – but with love and affection, and the conclusion is beautiful. I’d bet you don’t hear a pin drop when it’s performed.

Barrington’s nostalgia is near-enough all-embracing, from ‘Gone With The Ships’, a poem dedicated to Salford writer Shelagh Delaney –“You never once doffed a cap / and you spoke just like us ordinary folk” -  to appearing to miss the graffiti and “monolith concrete” that has been replaced by the “plastic and glass covered malls” in ‘The Precinct.’

The tour de force of this collection is strangely almost buried away on the back cover, and doesn’t feature on the contents page. But this loving roll-call of “70s kitsch” – including the woodchip anaglypta and nicotined artex ceilings, of course – is in another league. Those who were around at the time will remember, if ruefully, “World in Action, World of Sport, or Walden’s Weekend World”, as well as “a midweek thrill from Benny Hill and them semi-naked girls”.

This poem emphasises Barrington’s skill as a wordsmith, and his benevolent remembrance of his roots, including the “Flamenco Spanish Senorita Dolls on the mantelpiece” - all gone now , “except for one, which sits inside of me”. The collection’s cover title is in the sky blue of Man City, too.