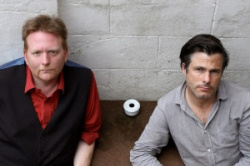 Looking for live literature this summer and can’t make it to the Edinburgh Fringe? Are you based in or near the south-west of England? Poet and performer Adam Horovitz will be presenting a Spoken Word Sunday on 30 August at this year’s newly revitalised Stroud Fringe festival, which features acclaimed poet and children’s author AF Harrold, poet and environmental scientist Rachel McCarthy, poets Philip Rush, Bethany W Pope, Brenda Read-Brown, Zelda Chappel and Eley Furrell, novelist Carly Holmes, an open mic accompanied by the Cheltenham Improvisers Orchestra and more, including the debut performance of Little Metropolis, a specially commissioned poetry and music show by Horovitz and musician Josef Reeve, pictured.

There are still spaces for performers to take part in a rather different sort of open mic, in which poets and flash fiction writers will have a chance to read their work with musical accompaniment from the Cheltenham Improvisers Orchestra on 30 August from 2pm. It is open to anyone who may have wondered how their writing would sound with a musical backing coming from an extraordinary but sympathetic band who play everything from guitars and saxophones to kitchen utensils. “For this accompanied open mic, eight writers get eight minutes each to perform as the band improvise behind them,” says Horovitz. "It’s first come first served and you can sign up by emailing adam@stroudfringe.co.uk. There may be places left on the day, although two places have gone already!”

Working on Little Metropolis with local composer and musician Josef Reeve, Horovitz will be entwining the thoughts, memories and experiences of people who live in or around Stroud with his and Joe’s own experience of the Gloucestershire town to create a bespoke piece to celebrate this year’s festival, and Stroud itself. Spoken Word Sunday takes place from noon until 10pm at the Lansdown Hall Gallery, Stroud. Entry is free.