THE BALLAD OF THE FRIGHTENED EAGLE 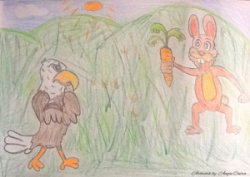 and chasing across the plains,

a rabbit skipping and laughing

at an eagle, in great pains.

But why's the eagle running,

surely he can fly?

and frightened he may die.

An eagle that can't fly,

who won't come out at night.

But then one day the rabbit stopped

he waited for the eagle

who by now was out of puff.

“Why can you not fly my friend,

there must be a better way,

all this running so doing you in,

the eagle had stopped for a rest,

“I have a horrible fear of heights,

since I fell from my mother’s nest”.

“It’s ok for you just sitting there,

chewing on your carrot

but just you try catching

a pigeon or a parrot!”

“Well why don't you just change your food;

try veggies for a while?”

The eagle replied, “Are you serious?”

and couldn't help but smile.

“It’s not as daft as you may think;

it'll save you all the running around,

The eagle thought and with a grin

“Where are you going?” the rabbit called.