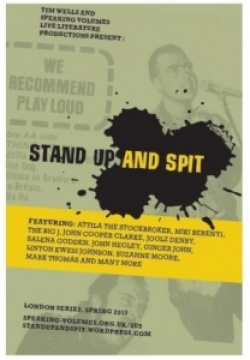 Attila the Stockbroker, John Cooper Clarke, John Hegley, Linton Kwesi Johnson and Janine Booth (The Big J) are among those on the bill at Stand Up and Spit at Camden Centre in London Thursday 18 June, one of a series of performance, discussions, film screenings and workshops about ranting poetry that have been taking place this year, organised by Speaking Volumes and poet Tim Wells.

Ranting poetry has its roots in the political climate of the 1980s, and was at that time performed to large audiences, was allied to punk and reggae, and is said to be the precursor to today’s performance poetry.

Arts Council England is supporting the London tour of ranting poetry from March to July 2015. You read more about ranting poets on the Stand Up and Spit blog by Tim Wells.

◄ In the footsteps of WB Yeats to mark his 150th anniversary

An American at Oxford: AE Stallings on how she became a professor of poetry contender ►