The poetry of lost landscapes: Tamar Yoseloff and David Harker merge text and art in Nowheres 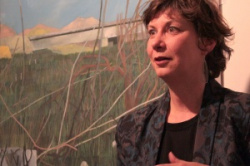 A shared obsession with “urban detritus” and “provisional, lost landscapes” has brought poet Tamar Yoseloff and artist David Harker together, to collaborate and explore with paintings, drawings and words in the production of Nowheres, a collaboration of images and text that was launched at the Poetry Cafe in London on Monday night.

Yoseloff, who is also a freelance tutor in creative writing and fascinated by the links between poetry and art, described her work with Harker as “one of the most exciting and fruitful collaborations I’ve had with an artist”.

The images in Nowheres  include a ruined fort, a pillbox on the Isle of Grain, a home almost hidden behind a sentry-like box hedge, a tropical palm out of place, and the boredom of tourism. At the launch the poet, pictured in front of David Harker's painting AL 151,  read ‘Other Landscapes’, a series of prose-poems that have previously been published in Long Poem magazine, and have the sharpness of early-Hemingway vignettes.

On a train hurtling through Essex the traveller “thinks of that poem, the unwonted station, the name he can’t remember”. During a long car ride he recalls family outings of his childhood, and how his mother “didn’t move or speak for the entire journey”, while his father constantly and unsuccessfully tried to tune the radio. On a tour bus the ennui of sightseeing is overwhelming: “This ancient place, this history, so what?”

Monday’s launch of Nowheres, designed by Andrew Lindesay, was packed with students past and present from Yoseloff’s courses at galleries such as the Hayward and the Royal Academy, and the Poetry School. Her other works include two collaborative editions with the artist Linda Karshan, and Formerly, a chapbook incorporating photographs by Vici Macdonald that was shortlisted for the 2012 Ted Hughes award. Her fifth collection, A Formula for Night: New and Selected Poems, is due out later this year.

David Harker said of Nowheres: “The images and text spark off each other, but they also stand alone as well.” His paintings and drawings, Drawing the Line, are on display at the Poetry Café until 27 June.