Michael Rosen for adults: plenty of laughs, but few of them political 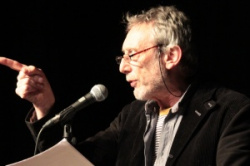 To be honest, I came away a tad disappointed after seeing Michael Rosen at Wenlock poetry festival on Saturday night. It wasn’t as if the man feted for his children’s poetry and applauded by some for his scorn of government education policies – and introduced by Luke Wright as “almost a national treasure” - wasn’t funny or entertaining. He was. He just wasn’t very political.

That might not matter to many, but it did to me. As the husband of a primary school head, I’ve seen her driven to exhaustion and frustration by the constant sniping at the teaching profession and damage to the education system caused by a former education secretary who, we all know, hasn’t really gone away. I had been hoping to report back on some trademark Rosen zingers aimed in the direction of a certain M Gove. They didn’t come.

Having got that out of my system, let me tell you what Rosen did say. After observing that “they don’t let me out often in the evening, to read to adults”, he did deliver a wry satire on testing in schools: “There is only one answer, and that is apples. All other answers are wrong. Education is getting much better these days, because there’s much more testing. Remember it’s apples, not leaves.” Oh, and yes, there was a short poem – a clerihew – about Grant Shapps, the Conservative party chairman.

There was also a joke about his parents holding meetings of the Communist branch in Pinner, north London, in their front room, which only they attended; a funny routine about his family eating hot potatoes; and a long, comic narrative reminiscent of Joyce Grenfell about a teacher trying to prepare a class for an school outing.

He then turned to some new poems, featuring a mouldering cucumber in a railway lost property office; a particularly barmy marketing survey; and a dog in a refuge that refuses to be rescued. But as Rosen continued to rifle through his papers, and to deliver a series of strange, surreal parables that all ended unexpectedly and rather mysteriously, you could hear the applause and laughter beginning to fade, long before the end.

At Michael Rosen’s performance it was my privilege to find myself sitting next to Hollie McNish, fresh from her own show next door, as she whooped and hollered approval for compere Luke Wright, for support poet and Wenlock slam winner Paul Francis, and for Rosen himself.

Laura Taylor’s magnificent review of a recent gig in Manchester has left me with little to add. But it was interesting to hear McNish develop the theme that Laura referred to in her review, about the internet trolls that comment on her hugely successful videos. So she included in her set her top five "most hated” poems, based on the comments on YouTube. At number five was the anti-porn ‘Touch’;  number four was ‘Hate’, about the English Defence League, meaningless, mindless racial attacks, and young men arming themselves with knives. Number three was her poem about London, commissioned by the BBC, reflecting her irritation at the capital’s self-importance: number two was ‘Reverse’, aimed at turning round stereotypical media attitudes, and her poem “most hated in America”.  Number one was ‘Mathematics’, her precisely argued case in favour of immigration: “I get loads and loads of hate for it.” And threats, too. She told a story against herself based on one particularly nasty message of menace. At the time of writing this, ‘Mathematics’ has had 1.9 million hits on YouTube.

Hollie McNish – “I avoid conflict by writing poems about it … I wrote all my GCSE physics notes in rhyme as well” -  talks so much common sense.  If she ever tires of the spoken word circuit, she should form her own party. Vote Hollie!

She was ably supported by Barry Tench - "being the only bloke on tonight, I ought to do a poem about football and alcohol" - and Midlands favourite Emma Purshouse, with a wonderful dialect poem about an ambitious but doomed to disappointment flamingo at Dudley zoo.

Spoken word star Luke Wright chose Wenlock poetry festival as the venue for the first outing for his new show, What I Learned From Johnny Beavan, an extraordinary, hour-long poetic monologue and feat of memory. Performed at the slightly odd time of Saturday lunchtime, there were no introductions as Wright got straight into his story, about a jaded journalist, and a location for an urban pop festival “without the mud” on the edge of town – well, southern Essex, in fact -  that triggers poignant memories.

As always with Wright, there are lines to cherish – “Think Duchess of Cornwall, but better at Twitter … It’s far too Lucky Jim. Feels all wrong” – as he surveys the optimism and disillusion of the Blair years, taking in contemporary London, a decaying estate bought up by a private company, a TV penalty shootout in the student bar interrupted by a life-changing open mic, and a time when some things got better but many things didn’t.  Wright will be finessing his latest show – an ambitious new departure for the popular compere and curator of Latitude festival’s poetry tent -  before officially launching it at Edinburgh in the summer. It was fascinating to be part of the first audience to get a glimpse of it.

◄ Who's your favourite performer? Deadline nears for Saboteur nominations 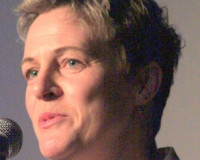 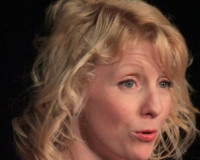