Playwright and poet Bernard Kops, and a library that changed his life 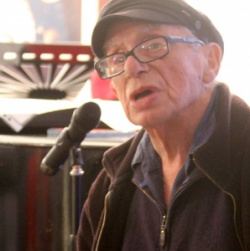 The veteran writer Bernard Kops is perhaps better known as a playwright, from the school of kitchen-sink realism – but his poetry credentials are not in doubt. He went on the first Aldermaston Ban the Bomb march alongside Michael Horovitz, Pete Brown, and Adrian Mitchell; counted Allen Ginsberg as a good friend; and his tribute to ‘Whitechapel Library, Aldgate East’, has been much quoted in campaigns to save public libraries from austerity closures.

Octogenarian Kops, born in 1926, told his audience at The 1,000 Monkeys poetry night at the Bar des Arts in Guildford about the march: “We thought we’d each write a poem. I wrote one and it was the first time I thought of myself as a writer.” He read ‘Shalom Bomb’, which is sprinkled with exclamation marks, and reminiscent of Ginsberg: “I want a laughter bomb, / filled with Sherbet Fountains! Liquorice Allsorts! / Chocolate Kisses! / Candy floss! / … I want my bomb to sprinkle with earth with roses.”

He introduced ’The Fire Next Time’ with the words “I’m a bit of a pessimist in this one”: “Next time we are all in the boxcar: / … Next time there will be no selections; / no survivors”. Kops told how the Holocaust “follows me … I shouldn’t be here, really”.  He explained how his father, a Dutch Jew, having brought the family to England from the Netherlands, tried to return with them all when he was assured that Holland would be neutral in the impending war. He failed, and as Kops said: “He was left in London with his large family – and all the others died.”

Kops said of Ginsberg: “We were good friends for a long time. I caught the best of him, not the worst of him.” He read an affectionate pastiche of the author of ‘Howl’: “Now I sing of the universal bagel.”

He was evacuated from London’s East End in 1969 at the beginning of the war, which meant that he “left school without any education”.  His poem, ‘Whitechapel Library, Aldgate East’, tells how on his return to the capital he educated himself at the library: “I emerged out of childhood with nowhere to hide, / when a door called my name and pulled me inside.”

The poem acknowledges and glories in the democratic nature of a library that turns no one away: “And the tramps and the madman and the chattering crone. / The smell of their farts could turn you to stone, / but anywhere, anywhere was better than home.”

It is a poem that he “cherishes”, Kops told his audience at Guildford, which, with its cathedral and university in Surrey, may be only 35 minutes on the train from London, but which seems a world away from the East End. It is the first poem in his current volume of collected poems, This Room in the Sunlight, and concludes: “And Lorca and Shelley said: ‘Come to the feast!’ / Whitechapel Library, Aldgate East!” A poem to be cherished indeed, in these days of narrow-eyed, flint-hearted politicians eager to pull up the drawbridge, deny access, and roll back progress.

Kops was accompanied at Guildford by his beloved wife Erica, and also by his good friend and occasional director of his plays, the poet Chrys Salt, who is also artistic director of the Bakehouse arts venue in south-west Scotland and literature convenor of the Dumfries and Galloway arts festival.

Salt read a number of poems from her latest collection, Dancing on a Rock, including ‘Roots’, about losing her Brummie vowels through elocution lessons; ‘Remembrance’, on visiting the Jewish Museum in Berlin, and ‘The Insurrection of Poetry’ (included in the book is an Arabic translation of the poem by an Iraqi poet); and an impressive sequence of poems about Otzi, the well-preserved mummy of a man from 5,000 years ago that was found in the Alps, on the border between Austria and Italy, in 1991.

The third guest poet at Guildford was John Smallshaw, whose poems, delivered in theatrical, performance style, included a nostalgic one about a family trip to the seaside, ‘A Fish Called Pythagoras’, and his rueful reflection about the 1960s: “All sex and drugs and rock and roll. Well, more drugs than sex, in my case.”

The 1,000 Monkeys is energetically compered by poet Donall Dempsey, who with his partner Janice Windle, also organises another monthly poetry night in Guildford, the Keystone Slam, in a nearby pub just across the river Wey. Jan is also compiling a third anthology of poets who have performed in Guildford, due to be published in a couple of months’ time. They are organising a forthcoming poetry event at Guildford Fringe with Simon Mole the headliner, and also regularly head for London, to scout out talent to invite back to Guildford – a remarkable poetry workrate.

On Tuesday Donall, not overly encumbered by the fact that he was one of three poets – none of them Bernard Kops – who was using a walking stick on the night, performed a handful of his own poems before introducing his guests and regular and debut open micers. It’s not possible to list them all, but just to mention three: Ray Pool, making his debut with a long, amusing poem about a couple who “swear by Scarborough”, delivered in an Alan Bennett voice; Elaine Stabler’s use of British Sign Language in an extract of her poem called ‘Body Talk’; and Graham Brown’s knockabout ‘The Poetry Police’: “We like to give a villanelle … we did Larkin for illegal parking.”

Tom Raworth, innovative poet who helped to shake up the 60s, dies aged 78 ►

This post had me with the small hairs rising Greg. Sometimes you just feel as if you have been caught up in a spiritual maelstrom and racing up the helter skelter of progress. That evening at the Bar des Arts was my first foray into live reading and of course your revue brought it all back . I have a signed copy of the Bernard Kops book and was graced with his comment about "I have a good face," and to call myself Raymond . (One already exists of course)! I remember Chrys Salt on a stick and playing it down. I spoke to you and thought you were an actor, whose name I still don't know but saw on an old re-run of Booth.
Janice is suggesting a book launch for my pamphlet so no doubt all will be revealed. And Lynn hasn't left me yet!