Poetry of protest: why Manchester's John G Hall strikes a chord across the Atlantic 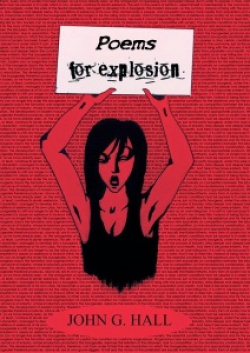 The latest fusillade of poetic political bullets has been fired from Manchester via Cleveland, Ohio, thanks to John G Hall, whose latest collection, Poems for Explosion, has been brought to the page by American publisher Crisis Chronicles Press (illustrated by Becky Mackay).

Wythenshawe-born Hall’s links to the US poetry scene are deep and wide and the Lancaster University history graduate says they seem to be more receptive of political poetry over there. “I published and edited a magazine in Manchester called Citizen32 which published poets from the UK and abroad. Through this I came into contact with many of the Beat poets such as Lawrence Ferlinghetti, Diane di Prima, Amiri Baraka, Jack Hirschman, and many previously unpublished Americans.

“When I came into contact with American poets over the internet they were mostly underground writers, publishing web magazines or hard copy magazines. So I submitted work to these editors rather than British magazines, who seemed to look down on web magazines and the underground.

“Having said that, I was published a lot in the British small magazine scene at the time, but one of the paradoxes of American poetry is that it is far more left-wing and revolutionary than the UK. I submitted to one of America’s left magazines called Left Curve edited by Jack Hirschman (poet laureate of San Francisco at the time) and they published some of my poems.  I came to count Jack as a friend ever since.

“This was my introduction to the American underground revolutionary culture, since then my work was published more there than in the UK. In fact one poem in Left Curve was taken up by a famous black artist Theodore Harris and used as the centre motif for a large art work, subsequently exhibited in Paris and American art museums called ‘War is the sound of money eating’.

“So when I contacted John Burroughs of Crisis Chronicles press, based in Ohio, he was welcoming and appreciated my style. The editor selected from about 40 poems including all kinds of styles and topics but mainly protest, engaged poems.

“As a one-time editor I appreciated that some of my poems are awkward to present in book form as I sometimes use breath-ended forms that shape strangely on the page. So I was prepared for editing and I respected John’s editorial skill and understanding being a poet himself.”

Hall has been described as a bear of a man and his relentless dissections of politics and politicians come like the strike of a huge paw at the heads of a hydra. He launched his night at Manchester’s Sandbar with a rousing ‘Thank you Mr Cameron for teaching our children about the need for revolution’ backed by thudding beats, which was inspired by a student demo. If you need a reason to turf out the Tories next month, it’s all there.

here on the tarmac sounding board of a generation

the inner ears of young conscience recognize the drum

Hall’s riposte to non-political work followed with ‘The Apolitical Poet’ which I later showed to a friend. She had just met a man who described himself as “apolitical” and then proceeded to sing the praises of George Osborne. My pal said she wished she’d had Hall’s poem to hand to put him in his place.

‘Revolution is a hard dream to sleep through, but some do’ is a gem of a poem; sparse, harsh, almost cruel, defining change as “a deep dangerous seam to prospect, so they settle for the surface of things”. ‘You are here to go (the Rabbit Revolution)’ goes deep into Hall’s Beat Poets inspiration while it’s easy to see why the publisher grabbed ‘Run Obama, Run’ for the book.

Run Obama, you dumb trusting son of a gun!

The bankers have pulled the pin, handed you the grenade

Retreated to a safe condo way out west, a day at the racists,

run Obama, they have locked you in the book depository

Planted the next war, the great depression, the next atrocity,

I pray you have no Jack Ruby brother, no native Judas

And that snow white has changed her color once and for all.

Hall – who says his gateway to poetry was the work of Dylan Thomas at school -  doesn’t get around the local poetry scene as much as he might because of family responsibilities.The book is dedicated to his late father John Thomas Hall and Hall is now his mother’s carer. I wondered what kept the fire burning in his belly.

“My dad was a quiet and very peaceful man. I never heard him raise his voice in anger even once. He did have a belief in love and hated injustice. He suffered a stroke when he was young and never returned to his job as a weaver, which was a very stressful job that probably contributed to his illness. I was his full-time carer as well as my mum’s in recent years -she suffers from dementia. So a sense of injustice and the creed of love has propelled me into politics and poetry.”

Musical clues to Hall’s philosophy were evident at Sandbar as we settled into our seats to Pulp’s Common People, the Manics’ If You Tolerate This Your Children Will Be Next and Springsteen’s We Take Care Of Our Own. Does the self-styled “lapsed Buddhist-Marxist” find today’s politics more or less inspiring for poetry?

Hall said: “I am no longer active in politics because of my family commitments for one, but principally because I found increasingly that my hero William Blake got it right when he said ‘before there are revolutions there must revelations’. That means to me that counter-culture and poetry can be used to alter the way people perceive the world or at least expand their political and personal imagination to take in and fully understand the true nature of alienation and oppression. At a time when the waters are being muddied I think there is a need for a rugged and direct approach to poetry construction rather than the counting of angels on pinheads.

“As for Thatcher, she is still with us. Indeed, she made her impression in history and represented her class by practising a rugged and direct approach. The ruling class understand that subterfuge and clarity of intent energise people. As for the election I think Labour will win, with a small majority. It would gather a landslide victory if it attacked the rich and brought back the spirit of the 1945 Labour government - but that is a whole new poem.”

Hall used to run the regular Beatification night in Manchester, a Beat poetry inspired event. “We put on Beat poetry films, invited poets such as Michael Horovitz, Agneta Falk and George Wallace. Plus we ran Beatification workshops. However, because of my carer duties I cannot get out in the evenings unless I pay for a carer to replace me. This I cannot afford.”

He says he still takes one-to-one workshops occasionally and small groups all based at the Sandbar, Grosvenor Street, Manchester, but has to charge to cover travel and materials. Hall is leading the charge for political, protest poetry and Poems for Explosion is a rousing, thoughtful and ultimately life-enhancing collection.