Far from a comfort zone: Maggie Sawkins on a scary journey, and the friends she found along the way 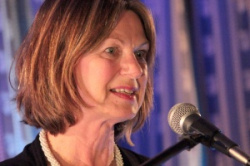 The winner of the Ted Hughes award for new work in poetry will be announced in a few days’ time. Meanwhile on Saturday night last year’s winner, Maggie Sawkins, launched Zones of Avoidance, a collection of poetry based on her multimedia production that triumphed in 2014, at Portsmouth’s historic Square Tower, a former gunpowder store, from where you can watch a constant flow of ferries coming in and out, and see the Isle of Wight across the water.

Zones of Avoidance, however, with its story about a mother trying to deal with her daughter’s drug addiction, and the heartrending moment when a baby has to be given up for adoption, is no picture-postcard portrait of this old naval city.

Playwright and director Mark Hewitt, who worked with Sawkins on the award-winning project, welcomed members of the recovery community in Portsmouth who were at the launch, and who had collaborated with the film and the recording of their own words.  He told how the project began in October 2012 with the recording of first-person testimonies of recovering addicts, and how much was put together in the basement bar of the New Theatre Royal in Portsmouth – not that glamorous a location, we were led to understand. He said: “There were so many layers of text … we realised we had a significant piece of work.” The journey ended “at this posh club in London, where Maggie won the award, which was incredible”.

Sawkins introduced her reading by saying that the Zone of Avoidance was an area of the night sky “beyond the Milky Way”. She had been attempting to write a poetry sequence about coming up against “a series of walls” in trying to deal with someone with addiction, adding that the whole subject still felt “a bit scary”.

She read a number of poems from the ‘Zones of Avoidance’ sequence, including one about handing her daughter some money to feed her habit, and ‘Hooked’, with its haunting refrain: “I vow each time not to feed you / I should lock you out but you’re too far in.”

‘The Cord’ tells of her presence at the birth of her daughter’s baby boy, which had to be taken into care: “I knew what was going to happen, but she didn’t, unfortunately.” The poem includes these lines: “I imagined it soulless, like a stone / (a stone cannot haunt one’s dreams) // so that if it was taken from us, / we’d be glad to be rid of it. // I hadn’t reckoned for the sound / of its unborn heartbeat … When the nurse asked if I would cut it, / I could not cut it.”

Recordings were played of recovering addicts’ testimonies, parts of which had featured on the award-winning production. One told of going to an illegal squat party, and of taking first ketamine and then acid, and after the initial euphoria, going down into “what some people call a K-hole … you kind of die, and then you’re reborn”.

Another told of being in hospital, “having my stomach drained. The doctor says you’re going to be dead within a week. My friends came in to see me, and I saw the tears in their eyes, and that’s when it hit me. It was probably an epiphany moment.”

Sawkins, who teaches and works with the recovery community in Portsmouth, as well as running the long-running Tongues&Grooves poetry and music night, then welcomed members of the recovery community at the launch on to the stage, to each receive a copy of the book. Their delight at being there was moving to see. Ryan said he felt “quite emotional about the journey we’ve been on, with Maggie”.  Nathan paid tribute to the creative writing programme he had taken part in on Saturday afternoons.

Dave, who now visits jails and talks to prisoners all over the country, said: “Five years ago I was injecting heroin and smoking crack. I never thought I’d be talking to you guys at a book launch. I thought my life was done, that it was worth nothing.” Now, he added, “I can share my experiences, and how I got out of it.”

Elliot, who said he was “not used to public speaking”, had come to Portsmouth a few years ago, “and I was beaten”. In the second half of the evening, with music that captured the mood of celebration at this packed event, he could restrain himself no longer – and took to the floor, and danced a jig, with a glorious smile on his face.

Background: The Write Out Loud interview

'It's about what comes from your heart and soul': how 'amazing' project helped pupils learn to love poetry ►

It was a privilege to be there, Maggie.

Thanks for taking the time Greg. This is a wonderful record of the evening, and that last line is a real tear jerker.