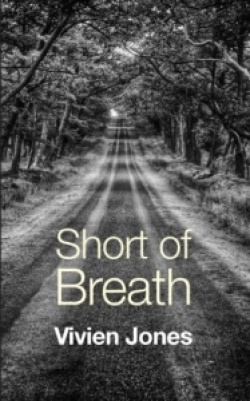 Vivien Jones lives on the north Solway shore in Scotland, and this is her second collection of poetry. Short of Breath has no overarching theme, and encompasses some subjects that are perhaps predictable, such as family snapshots, or a visit to a stately home.  But here are others that take you by surprise: a child watching her father making a mysterious box; a raincoat of “shimmering emerald green” cut up and turned into a Robin Hood outfit; a sense of wonder at wood and trees.

Jones has a wide-eyed interest in astronomy, and “the pounding music of the galaxies”. She is fascinated by Pluto, and its relegation to the status of a minor planet: “I am dark, / too far for light to lift / my rocky heart, / what warmth I know / is just less cold” (Pluto’s Lament’).

The title poem is about an asthmatic child: “After the tearful waking, / we spoon, my little asthmatic and me, / he tracks my breathing, and follows / my rhythm with perfect trust.”

The collection includes ‘Patna to Sauchiehall Street’, reflections on a meandering bus ride through hills where “the coal’s long gone”, leaving “thin men with starved spirits” leaning against the wall of a “boarded up-institute”, and ending in a racist confrontation in Glasgow that leaves its perpetrators “secretly shamed”.

Another poem explores the characters and stories revealed by graffiti in a rural bus shelter – Murphy and Shanks, Bella, queen of the Jelly Fish Prozzies, and the Spoons Boys. Jones revels in the Rabelaisian accounts she finds in the shelter, and imagines that “Murphy is deep in Bella’s cleavage / … when Shanks heads for the bog, / he is followed by a smirking Spoons Boy.”  (‘Graffiti Tales’)

Jones faces up to the years to come. A poem about anticipation and dread of losing a partner is titled ‘After Kerouac’s Visions of Cody’:  “The black side of love is fear of loss, / and one of you is going to get it.”

Her style generally contains few fireworks, and is often chatty, rather than lyrical. But for all that there are moments when the poet is swept up by a different kind of language, almost despite herself: “Deep sucking on pebbles, / sorting them from fine to coarse, / a long rhythm, slither and suck.” (‘Gunwalloe’)

In a collection that is generous in length, and breadth of vision, Jones takes us beyond Dumfries and Galloway and rural bus rides, to Cornwall and Malta, and to the far reaches of the solar system. I enjoyed Short of Breath for its scope, humour and humanity.