The search for peace after war: one former soldier's story 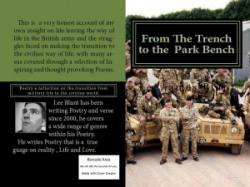 “The war starts the day you leave the army …”  Former soldier Lee Blunt talks to Frances Spurrier about the impetus behind his new book of poems, From the Trench to the Park Bench: a reflection on the transition from military life to the civilian world.

How long have you been writing poetry and what made you start writing?

I have been writing poetry and songs since 1999.   I was inspired heavily during an operational tour in Basra palace (Saddam Hussein’s) whilst I was a regular soldier in the British army. All in all it will be around 15 years.

2014 saw many articles, reviews and new anthologies commemorating the centenary of the first world war.   A collection by Kevin Powers Letter Composed During a Lull in the Fighting was shortlisted for the TS Eliot prize earlier this year.  What do you think makes people want to put their experiences of war into poetry?

I feel it is a two-way process, it gives the reader a detailed insight into the emotions of a soldier who has been through the harsh brutality of modern warfare.   Additionally it helped me as the writer to release any deep thoughts I held of the experiences and challenges I endured and overcame both before and after my time serving as a soldier. Poetry can give a very honest account and realism of war,  and that realism can be very different from the way the media report it.

I understand that your newly published collection From the Trench to the Park Bench focuses on problems faced by soldiers returning from active service. Can you say a bit more about this?

There is always a problem with ex-forces personnel accepting society, or society accepting them: many come from difficult family backgrounds, they can be institutionalised in the services and ill-prepared for civilian life after leaving. Initially I looked back on the culture shock I had when leaving the British army and making the transition to the civilian world, and how many struggles I faced.   It became apparent to me how many ex-forces personnel are now homeless and disconnected from society.   These are some of the events I try to work through in my poems.  I felt the need to put a collection of my poems together which highlight these struggles of reconnecting to the everyday civilian way of life.

Your work highlights a problem of soldiering that is too often overlooked in the media hype surrounding service - that is, what happens afterwards?

My poetry is exactly that and I feel one of the reasons that a soldier is faced with a challenge when he leaves the forces is that he will be  used to a very structured, very regimented environment, which is absolutely right and proper whilst serving in the military. I was told something which I will never forget: “The war will start for you the day you leave the British army,” and I found that to be absolutely spot on. How very true that statement was.

My book reflects all the personal struggles and obstacles faced during this period.

You have chosen to self-publish your work.  What was your experience of this process?  Would you recommend it to other readers who might be thinking of going down the same route?

I found the process to be quite a long and slow one, but ultimately worth it and very rewarding personally, to share my accounts and experiences in this way.   My book is available in hard copy and kindle format.   I was overjoyed to see my book in paperback after years of writing.  I would highly recommend writers with aspirations of publishing to go down the same route I took, but be aware there are some unscrupulous publishers out there that just want to take large amounts of cash from you to publish your work.

How do you want your poetry to develop in the future?   What other writing projects are you undertaking, or hoping to undertake soon?

I have already started to compile a selection of poems for my next book.   This will be a selection of poems based on horoscopes and star signs as I am very interested in the different characteristics which may be found in say a Virgo star sign, compared with a Capricorn or Pisces. I have also been experimenting with different styles such as haiku and modern sonnets.

Char March at Write Out Sale at the Waterside tonight ►