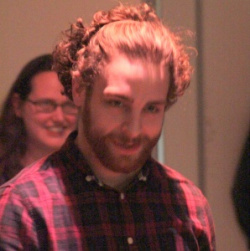 Imagine it: you have a new poetry collection. The launch is arranged, you turn up, but you’re not required to read. It happens all the time when Live Canon is involved.

Thus when Marcus Smith, born in Oxford, raised in America, arrived at the Seven Dials Club in London’s Covent Garden, for the launch of SEZ (Everything Speaks), poems that were initially drafted on his iPhone while he was on the streets of London, he was quite happy to be a spectator and a listener at a performance of his own poetry.  Afterwards he said he “blown away” by the way actors Leon Scott, pictured, James Scott, and Katherine Jack had portrayed his words, prowling around the darkened room, interrupting each other, popping up in unexpected places, and concluding their performance with the words: “My phone’s dying …”

Smith has described the collection as “a series of immediate responses to what happens on the street, in offices, parties, riding a bus, the train, the tube, passing a storefront, overhearing a conversation, sending and receiving a text. SEZ was initially drafted on my iPhone and sent as texts to my wife. Sometimes she prompted them (whether she intended to or not). I began this manuscript in this way for immediacy, for catching life before it runs away to the next block, for recording responses before they disappear into another lost moment.”

Live Canon are a group of professional actors and theatre makers, led by artistic director Helen Eastman, who founded the ensemble in 2008, after feeling that there were very few opportunities to hear the “back catalogue” of poetry across the centuries, learned and performed from memory. They perform at theatres and at festivals, and work with institutions such as the V&A.

Developments have included an annual £1,000 poetry competition, with winners and shortlisted poets – Marcus Smith is one – having their collections published. And performed. Live Canon actors now often mix contemporary poetry and the “back canon” together, without telling the audience what exactly they are listening to until the end.

Helen told Write Out Loud that the initial experience could be “terrifying” for the wrong kind of actor. “Where’s the character? It’s not something that everyone can do. You have to be very unpretentious, very relaxed. If they don’t read, understand, care about poetry, it doesn’t matter how good an actor they are …” She added: “You need to learn it, you need to work it in your mouth, you can’t mess around with the rhythm.”

Confessing to being “a form, structure, metre, geek”, she sees Live Canon as “a bridge between performance poetry and words on the page”.  And she paid tribute to leading poets such as Glyn Maxwell and Derek Walcott for supporting Live Canon’s approach.

On Tuesday night she also paid tribute to Marcus Smith’s poetry in SEZ, praising it as “an amazing lyrical tribute to our city”.