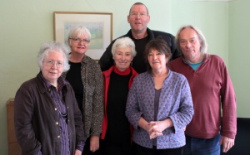 Members of a poetry group in Cornwall are looking forward to a visit from a poet who was shortlisted for this year’s TS Eliot Prize, after they won a Poetry Book Society competition.

Indian King Poets, who meet weekly in north Cornwall, “come hell or high water”, discussed the 10 shortlisted poets at a series of meetings. Member Diana Smith sent in a report on their deliberations, and the group was awarded the prize of either tickets for the TS Eliot Prize readings at London’s Southbank earlier this month, or a visit from a shortlisted poet to their group. Not surprisingly, Indian King Poets chose the latter, given their geographical location.

Diana said: “For several years we've had extra sessions reading and discussing the TS Eliot Prize shortlisted collections. This year the PBS launched a reading groups competition, asking for a 300-word account of one session.” She added that there was “great excitement and anticipation” about the future visit of a top poet.

Her report, from a first session that looked at four of the poets, included individual verdicts on Hugo Williams (“He seems to be doing almost nothing, but he does it perfectly”); John Burnside, who “doesn’t wear his knowledge lightly”; and contrasting opinions on   Arundhathi Subramaniam – “It’s a nice, fresh style’ … “her language is all over the place”. Pascale Petit was their favourite from the first session. Each poet was "championed" by a member of the gorup.

The Indian King Poets have been organised for a number of years by poetry activist Helen Jagger, who also distributes a monthly email newsletter detailing poetry events in Cornwall. She wasn’t able to be there when I turned up at one of the group’s weekly Monday meetings, which was hosted instead by two friends of mine, Diana and Kevin Smith, who moved down to Cornwall two years ago from Surrey. (Soon after their move they filed a report for Write Out Loud on the visit of Simon Armitage to Wadebridge library during his south-west walk.) Kevin and Diana’s home looks out on the river Camel, the dramatic road bridge taking the A39 across it, and Bodmin Moor beyond.

A workshop session of the Indian King Poets involves creating something from a series of prompts, discussing the results, and then, after a break, looking at work poets have brought back to the group after revising and reworking. Kevin and myself, neither of us Indian King poets, were nevertheless invited to take part in the creative process that morning. One of the prompts that emerged, for some unaccountable reason, was a reference to the notorious butcher of branch-line railways in the 1960s, Dr Richard Beeching.

Ray Bolwer produced a long poem, that I found stirring and marvellous, that referred to the long-gone line from Bodmin to Wadebridge and on to Padstow, beloved by Sir John Betjeman; its replacement, the Camel Trail cycle path; and the exercise issues resulting from the loss of heavy manual jobs as industry has withered away in our land. Thought-provoking stuff, as you might expect from someone who with his partner runs a creative space at a Cornish slate quarry. Indian King Poets have taken part in “wild writing” retreats there. Ray is planning more such events this year, with details available in due course.

Another Indian King member, Mark Gibbons, distributed free-range eggs to members as he arrived. His day job is as an open-air artist, painting up on the cliffs, attracting buyers from the many walkers who stop and look at his work. Another member who had moved to Cornwall said she just felt “there were more creative people in this part of the world”. People like Indian King poet Kate Compston, perhaps, who won the 2014 Cornwall Contemporary Poetry Festival competition prize with her poem ‘Stage Left’.

I departed back to Surrey full of admiration for such a dedicated and hard-working group of poets, enthusiastic and serious about their craft.

◄ 'If we enjoy it we will try to publish it': Indigo Dreams aim to give new poets a chance