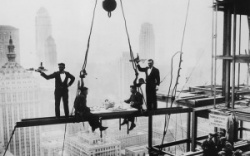 The Waldorf Astoria was Grandad’s hotel –

the place he had helped to build but never

got to stay in. From his room in the Bronx,

did he hop on the El to leave his mark

to check the details, as I try at least

to plot his absent years back from the splash

of its opening to the Wall Street Crash.

Working out his children’s ages, a gap's

revealed, and then how old he must have been –

a Volunteer with mouths to feed, his goal

something better than the Irish Free State.

His cause in abeyance, he chanced his luck

abroad, where he found the future rooted

in its bottom line. He returned with cash

But what did he make of bootleg whisky,

when he had no chance of a quiet pint;

or the well dressed hoodlums and shoeshine boys

who had never crossed fields or dug a ditch?

Above his head the sky’s a chart, criss-crossed

with girders, on one of which two workers

have started tucking in. A step away,

two waiters hover whose aim it is to please.