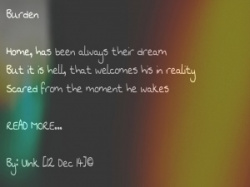 Home, has been always their dream
But it is hell, that welcomes his in reality
Scared from the moment he wakes
Scared to live another day
Silence behind troubled features
Not wanting to trouble, his troubled brothers
He bares his burden another day
To uphold his oath to an unwritten code
The war wages on beyond, his tour of duty
As somehow he found the road to hell;
On his way home
Wounds of flesh have healed months ago
Yet the wounds of morality scars more
Vice after vice have been abused;
In the attempt dull his pain.
Yet to claim and ownership to such a stigma
He would rather die then let that happen
Too proud and continues to serve
Brothers don't let this happen
Let him know the war rages
But you are there to cover his six
One self claimed life is one too many.