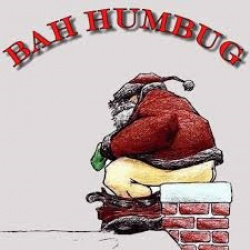 Santa Claus isn’t real -
there, I’ve gone and said it.
Just some smart-arsed marketing ploy
to stress your Christmas cards of credit,
an old Bavarian legend
glammed up and pushed by Coke
to give a job each yuletide
to some fat, be-whiskered bloke
who likes a little tipple
and knee jogging some pre-pubescent cutie -
under any other circumstance
you’d report him to project Yew Tree.
Don’t believe in those fancy reindeer
flying through skies on the hoof,
if they landed by your chimney
they’d destroy the fucking roof -
and speaking of that chimney
tell me how many fat guys
could get down one of them
after eating all those mince pies -
and how the bloody hell
does he get round every house -
he’d need a billion delivery drones
and he hasn’t got the nous,
even Amazon can’t do that yet
and at least they pay minimum wage
to their army of Festive workers -
the chuffing elves would resign in rage -
if elves even existed
which clearly isn’t right
otherwise the shops wouldn’t be so flaming busy
with consumers buying shite.
What is it with mulled wine?
It tastes like sweetened piss
and turkey’s just anaemic lizard -
Here’s the mistletoe, give us a kiss!.
German markets are a con
because no matter home many times
I visit with my missus
there’s never any busty frauleins -
just some eastern Europeans
handling your nuts,
baklava and olives
that will play havoc with your guts,
left out in the open
for everyone’s inspection -
I’d rather spend my brass in a Berlin brothel -
much less chance of an infection.

The only thing I’m sure of,
each and every Christmas day,
is there won’t be any snow,
it will just be dull and grey -
and have you ever seen
a robin sat on the handle of a spade?
And I will kill any bastard
Who puts on fucking Slade!
I’ve got every bleeding format
of ‘Merry Xmas Everybody’,
I am the personal pension plan
of that glam rock twat called Noddy.
If I had my way brother
I would pour a ton of shite
on those bastards who bedeck their house
with all those fucking fairy lights.
The national grid must be in meltdown
with all these knob heads in my street
who burn a million watts each night
on their forty eight day treat.
The only thing worth watching on the telly
is a Morecambe and Wise re-run -
instead we get East Enders
ratchetting up the levels of fun.
Then some moody teenage waster
lifts his head from his Xbox,
just as I rip open the wrapping paper
on my fourteenth pair of socks,
and asks if there’s any turkey left
The sarcastic little beast – errr….
we’ll still be eating that turgid carcass
all through next fucking Easter.
If those carol singers
don’t bugger off home to quench their thirst,
I’ll stick my arse against the letter box
and let the sprouts do their worst -
“Glad tidings of great joy”, they sing,
you must think I’m a mug.
Yours sincerely, Ebenezer Junior.
Merry Christmas – Bah Humbug!

Enjoyed this at the Mock Tudor.

I bloody knew it!
I'll get you put back on his list.

Cynthia / Graham
thanks for the comments - we do, as you know, wear masks in this poetry game. You may be interested in last years offering
http://www.writeoutloud.net/public/blogentry.php?blogentryid=40230
which is the mask and which the real Yorkshireman?
that would be telling ;-)

Oh dear oh dear Ian. You just don't get it do you?
Haven't you heard of magic?
Time stands still on Christmas Eve wherever Santa goes.

I hope you can still have a lovely Christmas even though you're a Santa atheist.

OK. Glad you read 'The Secret Garden' though; that 'robin on the handle of the spade' bit was a real turning point in the story, towards a very happy happening. And all these types who seem so tough!