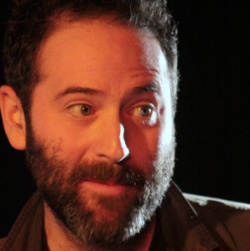 American poet and playwright Dan O’Brien has won the £5,000 Troubadour international poetry prize. Last year O’Brien won the Fenton Aldeburgh first collection prize for War Reporter, a collection of "docu-poems" based on conversations with the Pulitzer prize-winning Canadian photojournalist Paul Watson.  His winning Troubadour poem, ‘The War Reporter Paul Watson and the Barrel Bombs’, is part of a new work in progress that features Watson’s eyewitness accounts from Syria.

The poem focuses on the aftermath of a bombing, and talks of “low moaning beneath new earth … children rescued in a parody of birth”. The prize completed a remarkable 24 hours for O'Brien, who was shortlisted in the most promising playwright category at the Evening Standard theatre awards on Sunday night, for his play,'The Body of an American'.

One of the Troubadour judges, Neil Astley, of Bloodaxe Books, said O’Brien had submitted three poems, and any of them could have taken first prize. He added: “I found myself measuring every other poem against them.” O’Brien, who appeared at Aldeburgh poetry festival last month, had flown in from California for the theatre awards, and to read his winning poem on Monday night at the Troubadour in west London. News of his win was tweeted, retweeted, and favourited on both sides of the Atlantic, including this tweet from Paul Watson, which said simply: "Nicely done, Dan."

There were 20 other prizewinners, who won £25 each, and many were at the Troubadour  to read their poems. Those who couldn’t be there included 90-year-old Bob Rogers, from Falmouth, whose ‘Take Five’ took a wry look at the ageing process, and Rachel Piercey of the Emma Press, whose ‘Kate Bush as spider goddess’  was mentioned by judge Amy Wack as featuring “a heroine for our time”.

Coffee-House Poetry organiser Anne-Marie Fyfe said that when she rang Bob Rogers to inform of his prizewinning inclusion, he replied that he would celebrate with a drink. “I said, ‘Why not, it is midday!’ ” The list of prizewinners also included entrants from France, Ireland, Switzerland, and China, and there were other entrants from Slovakia, Denmark, Mexico, Zimbawe, and the Canary Islands.

The prize is organised by Coffee-House Poetry, and sponsored by Cegin Productions. You can read the full list of prizewinners, and see their poems here

Background: Dan O'Brien talking about his 'docu-poetry' at Aldeburgh

◄ On the cards: Write Out Loud at Stockport art gallery tonight