The Fire in Me Now: Michael Curtis, Cultured Llama 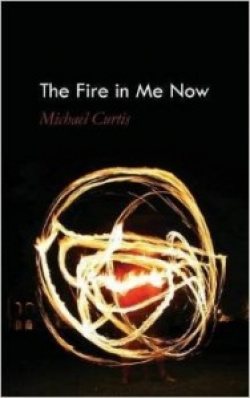 The title of this 12th collection of poems by Michael Curtis is taken from a quote from Samuel Beckett’s play Krapp’s Last Tape. At first reading the poet’s fire could be mistaken for pure rage; and the first of four sections in the book is indeed titled ‘Anger Management.’

This anger is reflected in such fear-and-loathing poems as ‘Safe’: “blaring home // … cocooned / in the metal pandemonium / of sense and sound that fills / its own dimension, a land/ where no dog chases a ball / out of an unlocked gate or two/ children laughing after school / never run into the lane”. Such poems appear fuelled by headlines, such those about a murdered pensioner (‘Unremarkable’); the slaughter of migrating birds (‘Now Sadly Extinct’); or the exploitation of natural resources (‘Paradise’).

There is a bleak, Larkinesque cynicism in ‘Not In Love’, in which a woman who is on the verge of an affair hears that her would-be lover has drowned in Cuba. She “didn’t seem too upset / because as she pointed out / she’d only been in lust with him / not in love and after all / they hadn’t done anything.”

The language Curtis employs is customarily clear, condensed, and musical, too: “The devil was in the  detail / the clatter of heels on wet pavement / checked to the decibel” (‘Dependants’).

It has few eye-catching airs or graces, but invariably repays closer inspection. The subject matter encompasses Afghanistan and the mourners of Wootton Bassett, mass graves on a “littered hillside”, Creole phrases, and the Seine, as well as sun loungers by the Med and African vendors.

That sense of looking back at the past as if it is a foreign country, that permeates the Beckett play, is present in this collection, too, in poems such as ‘Strange’:

“it’s when I try to overlay it

with my memory, attempt

to match the corners

and the edges don’t quite fit.”

In Krapp’s Last Tape the only character in the play obsessively plays tape-recordings recounting his feelings, that were made at different times in his life. In ‘Review’ Curtis is also looking back:

“Progress seems patchy as we look over

most of my life and me, well aware

it’s been quite a while since we

came up with a change of direction”

The poem concludes pessimistically with the fear that “we missed the main feature”.  The full quote from Krapp’s Last Tape, an achingly poignant play, is: “Perhaps my best years are gone. But I wouldn’t want them back, not with the fire in me now.” In the play the elderly listener cackles mirthlessly at hearing evidence of his earlier passion.

It’s clear Curtis appreciates the irony, and in the poem ‘Robin’ imagines reducing his horizons from a swallow’s migrations to Italy or Africa, to the back-garden patrolling of fence, pond, spade and acer: “I’ll sing favourite songs / and home in on seasons, / certain of my ground.” Here he is fanning the embers, keeping the sparks of the fire alive, making the best of growing older: “what I settle for / in this territory of sense / comes as close as breath, / examined by my hunger / for every sign of life.”

Other characters do feature in these poems, apart from the poet, but they generally appear as shadowy presences, at the margins, and that gives some of the poems a cold, self-centred quality. From the evidence of this collection, there is fuel enough to keep the fire burning, even though it may no longer give out much warmth.

Michael Curtis, The Fire in Me Now, Cultured Llama, £8

◄ From The Verb to Write Out Loud: Louise Fazackerley at Risk A Verse in Huddersfield tonight