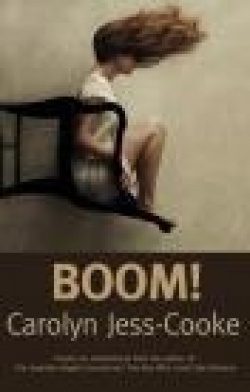 Thanks no doubt to the overwhelmingly male nature of the literary canon, birth and parenthood are under-represented in the history of British poetry, despite their importance in human experience. While still not being hugely fashionable – blood, gore and overwhelming love being perhaps meat too strong for the popular modes of irony and “telling it slant” – there is a growing body of work examining modern motherhood, ranging from Kate Clanchy’s Newborn to Kathleen Jamie’s Jizzen and beyond. Carolyn Jess-Cooke’s second collection, Boom!, is an interesting addition to this conversation.

The poems in Boom! were prompted by Jess-Cooke’s experience of giving birth to and raising her own four children. They examine the impact motherhood has on the poet socially, psychologically and spiritually. Jess-Cooke is a poet of some pedigree; her first collection, Inroads, won the Tyrone Guthrie Prize, an Eric Gregory award, and a Northern Promise award. Her bestselling novels are The Guardian Angel’s Journal and The Boy Who Could See Demons. She lives in north-east England with her husband and children.

Motherhood is still a battlefield where the personal is always political. One strength in these poems is how they highlight the crushing weight of societal judgement against mothers, and sometimes fathers, for the way they live their lives: personal choice becomes a public act. So ‘Poem Made From Bits of Newspaper Headlines’ reveals the demonisation of working mothers: “Childhood obesity to blame on working mothers. / Working mothers link to school failure”, it begins. Conversely ‘Staying at Home’ admonishes: “Imagine the home as a realm of immaterial business, / commerce of nurture. Fathom the architecture of confidence / and patience”, as it illustrates the often obscured, demeaned value of childcare. Mothers are damned if they do work, and damned if they don’t. So too are fathers, if they dare to stay at home and look after the children, as Jess-Cooke describes in ‘The Only Dad at Playgroup’.

Yet there are other, less contested, aspects of becoming a mother that these poems tease out: how motherhood fundamentally changes a woman, how motherhood is partially an inherited relationship, how having children opens up the terrors of loss and failure. In ‘Different Water’ the poet addresses the change wrought by new parenthood: “At the school gates she’s autumn weeping leaves / of every hue for the loss of summer. Often / she spies the girl she once was and thinks, wimp.” With a characteristically acute observation the poet describes how having children involves the irretrievable loss of one’s former life, one’s girlhood. There are poems here about the practicalities of parenting, about giving birth, post-natal depression and sleep-training.

Further on in the collection Jess-Cooke reflects on her own – seemingly troubled - upbringing and the generational impact on parenting. ‘Still Life, With Family’, a deceptively small, quiet, poem illuminates her own happy family life with what it is not: “no threat of anyone bleeding / or being bruised. No one will take their life / in their daughter’s bed.” Yet these are not bitter poems and in ‘Honour Thy Parents’ the poet offers a generous understanding of how parents are just flawed individuals: “understand they were / their own parents’ children – honour them / for they must live with their mistakes,’. Becoming a parent, she seems to be saying, helps one to understand one’s own parents as well as opening up the possibility of being judged oneself, despite one’s best efforts.

The 51 poems in this collection are rarely more than a page long and vary in style from free verse to sonnets. The use of repetition is a regular feature, rising to a crescendo of emphasis, as in ‘The Lotteries’ which lists the way luck changes with the advent of children, for example: “Lucky that the first scan shows a heartbeat, the second, health”, until it reaches its height: “and so the world goes on opening its many bright hands / of luck.” This latter quote also illustrates the facility Jess-Cooke has with coining a striking phrase as in the poem ‘Home Birth’ where she says: “as the contractions collapsed on me / like skyscrapers”.

This is not an unflawed collection. The parallel in the title poem ‘Boom!’ between the advent of a child in a relationship and a grenade explosion exposed a slight flaw which ran throughout. The parallel seemed facile, too easy. Motherhood is more like an act of the earth, a volcano or forest fire destroying that which was there previously, to allow new life. A grenade rips flesh so it can only mend in distorted ways; it is a damaging, a limiting. The sloppiness of the title conceit is replicated in other poems.  Some could have done with a decent edit while others were too sentimental in that the imagery did not convey the strength of emotion the poet appeared to be aiming for.  For example, in the poem ‘Planet’, a two-year-old is described as “soft warm ivy around me at midnight”, the addition of “soft warm” undermining the imagery of ivy as a twining, binding agent.

Fortunately a collection is more than its title and there is some fine work here. Jess-Cooke is acute in examining the choices women make, born of circumstance and personality, abilities, interests as well as the difficult relationship of feminism and women’s rights with biology. Boom! represents a useful addition to the growing body of collections which examine modern motherhood in all its complexity.

◄ Write Out Loud Marsden at the library tonight