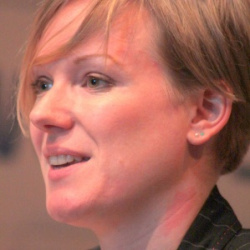 Having grown up in a household where Yiddish words were bandied around readily, it came as a shock to find this one sidling in among the Best Words, Best Order poetry titles of the other readers, in the gently arty surroundings of Snape Maltings.  An intriguing shock nevertheless, one that required further investigation.  For “schlock” means, more or less, rubbish.   Cheap rubbish, in a cultural sense.

Knowing nothing about this performance poem (I had been booked to see Jen Hadfield who was still sitting on a airfield in Shetland waiting for her plane never to take off) I assumed that poet, playwright and performer Hannah Silva – pictured at an earlier event on the poetry of disobedience at Aldeburgh - was not referring to her own work in these terms.  I assumed correctly.

The word refers to the novel Fifty Shades of Grey by EL James, copies of which were shredded in a pile on the stage.  As the audience entered the performance area, Silva was sitting cross-legged on the floor and tearing pages of this soft-porn novel out with her teeth.  So far so good, I understood - although I haven’t read the book I live on this planet -  so I understood.

After that it got harder. Schlock! is a performance commissioned for the Aldeburgh poetry festival, and is composed of Fifty Shades of Grey, and In Memoriam to Identity by Kathy Acker, who, Silva has said, wrote by splicing together “schlock” – true-life stories in magazines, science fiction, horror stories and pornography – with “good literature”. Acker wrote:

This is the deep secret.

And the non-humanity of our sexuality seemed to be the theme of what followed.  The performance involved different sounds recorded by the artist on stage and then set to repeat as a background to the reading (heavy breathing, sighs, lamentation and dirge-like sounds). Lines of the work being spoken were projected onto a screen for the audience to read, but these lines lagged behind the real-time reading. No doubt part of the effect - but it split the audience focus away from the performer. The poet used British sign language too, which I found quite hard to follow as I don’t read sign language.

Hannah Silva’s work is mesmeric. She worked incredibly hard, throwing body heart and soul into the performance. Shlock! tries incredibly hard to prove its point - but what that point was exactly, I found harder to determine.

These are all massively important subjects, and far too big for one performance poem to deal with effectively. The male baby, that is not yet old enough to talk, seems in this work to imbibe a tendency to control and dominate the female while still in the womb – a theme which Lionel Shriver also touched upon in her novel We Need to Talk About Kevin.

What about the female baby?  I don’t think there were any in the poem but presumably they grow up to recycle the same old, same old. There were no men in this poem either, except those cast in the role of rapists, abusers or potential abusers.   The handout for the performance described it as “literary terrorism”.  I applaud the “literary terrorism” that wants to cast pornography back into the pit from which it emerged.  But in seeking to rebut the “domination/submission” objectification culture of Fifty Shades, Silva falls into a trap that has historically ensnared many feminists, of trying to support and encourage women by casting men in the role of the baddies.  Sometimes that is justified, sometimes not.

I found this work tried to deal with too many huge issues and that it was compassion-lite towards 50% of the human race.  Additionally, while there was an immense amount of performance, there also needs to be poetry.  When we emerged from the performance my colleague asked me: “But where was the poetry?” I found it a hard question to answer.

Schlock! is produced by Penned in the Margins and will tour in 2015

And thank you Andra. I love to get other people's views and thank you for sharing yours with us. Certainly Silva's work is a real conversation starter and it's a conversation that needs to be had.

I had the pleasure of witnessing Hanna Silva's SCHLOCK at the Mac Birmingham last Wednesday and I have to say that there are several parts of this review that I would disagree with. I welcomed the multi-themes and layers and found the show richer for it. Theatre and Poetry often are the first and last bastions of complex matters. 'where was the poetry?' the show itself was the poetry, fresh with numerous details that invited us into the world Silva had created, our world anew - a fully conscious baby bearing omens, the taunting streets of a healing Mexico or the dehumanisation of uninvited pain. all united beautifully and like the best of poetry leaving you with floating images and an overall mood. Silva didn't miss her mark in delivering poetry at all.

As a male audience member I never once interpreted any part of the show as 'casting the role of men as baddies' her critique lay at the foot of glamorising non-consensual dominance and/or submission as its the root of '50 Shades...' yes the male baby illustrates this through out - a metaphor of Acker's cancer, E. L James' specific adventures into female sexuality and the pregnant place Hannah brought those two writers (as well as herself) to meet.

The BSL i thought worked well, i didn't need interpretation. movement is another language unto itself and like dance I don't need subtitles to help me read the intention beneath it, as i stated before the experience is richer for it's multi-lingual approach. In the end like many good poets work I've seen performed, i left comprehending that what's important is not that i part understanding everything or even hearing every word but if i spend less time trying to decipher every metaphor I can actually take home a hand full of provocative images and a cherished feeling. I wouldn't say it was over-ambitious, it was ambitious enough to challenge it's audience. I would recommend anyone interested in theatre and experimental theatre/poetry to hunt down Hanna Silva's performance.

Oh, sorry I missed it.
Seriously though, If I have got this right, a work that purports to be communicating concerns about male oppression of females, yet makes the male section of the audience feel unqualified to write about what they have witnessed surely, thereby, handicaps itself?
Frances, regardless of your concerns about the piece, I enjoyed your review in terms of its balance and erudition.

Thanks Greg. Great discussion going on on Facebook. This one is certainly a conversation starter.

As the colleague that Frances quotes at the end of this very fair review, I guess I should add my twopennyworth. My overall feeling at the end of this performance was a sense of oppression, which clearly is one of the things it is concerned with. As a male, I honestly didn't feel qualified to write about it. The clearest image was the one at the start, as we filed into our seats and Silva sat on the floor, biting off pages of Fifty Shades of Grey, and then spitting them out. She put huge energy into the British sign language that she employed, which made me feel guilty that I didn't understand it. At an earlier event she quoted Cathy Acker as saying she wanted to play with language, "like clay, or paint".