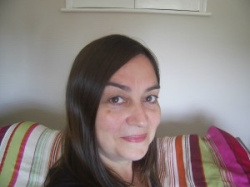 Poet and publisher Adele Ward has been selected as a Green Party candidate for next year’s general election. Ward, co-founder of Ward Wood Publishing, will be contesting Finchley & Golders Green, former territory of Margaret Thatcher, who was MP for Finchley in north London for many years.

In September Ward mentioned her political involvement while struggling to make herself heard during an outside reading in Red Lion Square at the Poetry Book Fair in London, as marchers in support of the NHS and demonstrators who had come from Jarrow were assembling at the same time. She said: “I was delighted to see them, because one of the key issues for the Green Party is the protection of the NHS.”

She added: “Contemporary poetry is sometimes criticised for not being about the ‘larger issues’, particularly politics. It's a difficult subject to write about because of the risk of preaching, but I think politics could do with more poets as parliamentary candidates. Poets have many of the skills needed - experience at public speaking, the ability to think quickly and deeply in order to answer questions at hustings, and a passionate engagement with social issues.

“I felt I had to get involved this time because there are such serious problems in our society and it's important to tackle them, or at least to have a voice to campaign on behalf of others and to put pressure on the main parties. I hope more authors will get involved and use their communication skills to raise public awareness about what's really happening - it's very satisfying to be able to argue and debate in a way we can't in poetic forms!”

Thanks Anthony. Your message about corporate lobbyists reminds me of the words of Donnachadh McCarthy who has written about political corruption. He's going to be a speaker soon at our Barnet Green Party social. He was inspirational at Occupy Democracy in Parliament Square. We really do need change.

I wish you every success Adele; the "traditional" parties offer nothing to their electorate and this country needs a brave new direction, which is not controlled by the forces of corporate lobbyists and the well-connected.