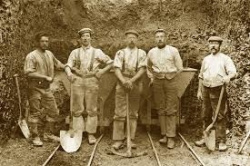 A blasphemous horde of poachers and drinkers

the big money had spawned, they dug their way

through rocks and sodden clay. Camped out like tinkers,

only the brass was missed when they picked up sticks,

following the line to another day

From those whose curtained lives they did not share,

they earned scant praise for laying down the future.

In an age of Progress they were its nomads,

shaping it slowly barrow by barrow

who thought of them at all when the band played

and folk clutched tickets for which they had paid?

In Search of Lost Time ►

Fine tribute David.
Mind, it reminded me of starting in a factory (at sixteen) where many of the jobs involved physical `hand-balling`. Automation was introduced on a grand scale and - by the time I retired - those jobs (and the wages therewith) had vanished (from 1700...to 250). This was happening in industry generally.

To `electorally massage` the jobless figures access to benefits like invalidity etc; was relaxed generously (and so was introduced the dependency culture`)

Your piece is appreciating and truthful...your
`big money had spawned` reminded me of the fact
that these were - dangerous - but well paid jobs.

I read a book called 'Song of the Earth'( whose author escapes me just this minute, but easy to check if anyone is interested.). In addition to canal transportation, part of it dealt both passionately and poetically with this same theme of 'navvvies' on the railways and overpasses. It struck home for me in its realism, scale and compassion.

This is a great poem. Their 'curtained lives' is excellent. You have a deft turn of phrase, David.

'Navvies' have been forever, haven't they? And continue to be. I remember studying about Oriental labour to build the United States and Canadian railways across the North American continent - the conditions and the stigma.

I would endorse what Greg says. Visiting St. Leonard's at Chapel-le-Dale opened my eyes. The poem is a worthy tribute to forgotten people who had it very tough.

An interesting and worthwhile subject for a sonnet, David. Many railway navvies didn't move on, of course, but remain in cemeteries up and down the wonderfully scenic Settle & Carlisle line, for instance. The good old Victorian days, before the dreaded health and safety.