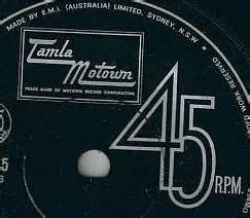 Before my approach to life grew earnest

I was all ears for Tamla: the sweet sounds

of soul as far removed from its roots

as I am now from The Motor City.

In the days when I was thirteen

was an awkwardness with girls

and a biblical plague of spots,

as I tuned in on a cheap transistor

or played the vinyl

An ocean away those mythical streets

were hard slog and prejudice,

a life I had no sense of beyond teenage angst…

But when the drummer found the beat,

the writers tweaked their slickest chords

to a symphony of heartache

than the couple of minutes it called for.

and the sharpest moves

long before the music faltered.

After the rip-offs, drugs and sleaze,

while cars blazed in the ghetto.

David,
As someone who `came of age` with Crosby and (just about) Sinatra, Tamla was just a sort of `pleasant background` to me.

I sometimes wonder though if those last decades
of (hopeful?) universally listened to `popular` music (ending in the `sourness` of your final stanza) have anything to do with the virtual vanishing of anything like `tunefulness` in modern poetry?-Just a thought.

(there he goes on his hobby horse again):)